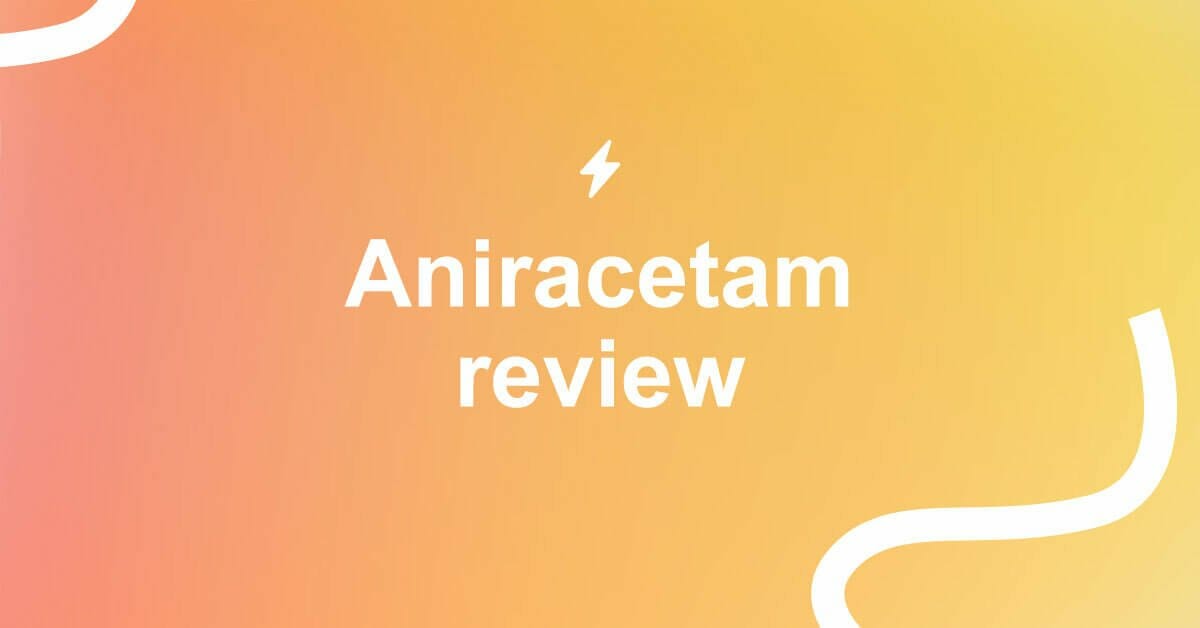 If you ever researched nootropics, you probably came across racetams. Piracetam is the original nootropic that was made between 1950 and 1964 by Corneliu E. Giurgea. Aniracetam, on the other hand, is not a nootropic but an unapproved drug used for relieving depression and boosting cognition. But is aniracetam effective? What do studies show? And is it safe?

Aniracetam is a type of racetam, a class of compounds that affect different regions in your brain. Aniracetam is used for improving memory, dementia, anxiety, and depression. [*] However, we lack proper evidence to confirm its efficacy and safety.

A pharmaceutical company Hoffman-La Roche developed aniracetam in the 1970s. Many biohackers and researchers have been experimenting with it ever since.

As stated by FDA, all racetams (not just aniracetam) are new unapproved drugs, so they cannot be sold as safe and effective nootropics. European Food Safety Authority (EFSA) didn’t even start reviewing aniracetam.

The biggest challenge is the fact that we lack racetam studies on humans. That’s why we are not sure how aniracetam actually works, if it is safe, and how effective it is.

How Does Aniracetam Work?

Based on the current research (mainly done on animals), the mechanism of action is partly understood. Aniracetam works as follows:

Since glutamate is an excitatory neurotransmitter, too much of it can cause severe issues.

As I showed so far, aniracetam increases the amount of glutamate in our brains. Even though glutamate is the most common neurotransmitter in our central nervous system, it can also be very toxic. [*]

Too much glutamate can kill brain cells, while too little glutamate can cause issues with learning, memory, and perception. If we lack glutamate, the acetylcholine levels decline.

I already mentioned some of the potential benefits of aniracetam, but let’s have a closer look at them.

Potential benefits of aniracetam include:

Another study showed reduced impulsivity, while accuracy and speed of thinking remained the same. [*] This tells me that aniracetam may influence the prefrontal cortex, and it could be helpful for people with ADD & ADHD.

However, newer studies could not replicate the results from the old studies. Specifically, one study published in 2014 shows that aniracetam did not affect cognition in mice. [*] Not only do we have mixed results on animals, but we also cannot apply these studies to humans.

The only studies with aniracetam done on humans were looking into its effects on memory. They show potential benefits for people with dementia.

For example, a randomized controlled trial of 276 dementia patients shows that supplementation of aniracetam for 12 months prevented cognitive decline. [*] The authors concluded: “Our findings indicate that aniracetam is a promising option for patients with cognitive deficit of mild severity.”

Another double-blind randomized controlled trial of 60 patients with mental deterioration found that supplementing aniracetam for four months improved cognitive function. The dosage was 1500 mg per day. [*]

Yet another study showed improvements in attention, memory, and logical-perceptual ability in patients with Alzheimer’s. [*]

There is still insufficient evidence to confirm aniracetam’s effects on people with Alzheimer’s disease, but the current research is promising.

However, we lack studies on humans to confirm its potential effects. Also, it is hard to expect that a cognitive enhancer would also improve sleep quality.

No studies done on humans showed any anxiety benefits of supplementing aniracetam.

One study showed that supplementing aniracetam decreased dopamine while it increased serotonin levels. Another study shows that aniracetam can increase the level of both neurotransmitters. [*]

Again, we lack studies on humans to confirm the benefits.

Lastly, some research shows that aniracetam may help with recovery from brain damage. In one study on rats, blocked brain blood flow caused tissue damage. This lead to bladder overactivity. Researchers hypothesized that aniracetam may restore neutral pathways. However, this hasn’t been proven yet. [*]

Another study looked at the of aniracetam effects on rats with fetal alcohol syndrome. Supplementing aniracetam actually increased the amount of AMPA receptors in the hippocampus and reversed the syndrome effects. [*]

However, we lack studies on humans to see if aniracetam can actually help people with brain damage. As it currently stands, human studies are not carried out due to safety concerns. [*]

Due to risk factors, the researchers are avoiding studies of aniracetam on humans. Until we know more about this drug, I cannot recommend supplementing it. Even if some effects are proven in the future, there are currently more effective and safer nootropics available on the market for all the mentioned benefits.

Based on the available research, aniracetam rarely produces any side effects. It is non-toxic and well-tolerated. We don’t know yet if it is safe for long-term use.

The most common side effects include fatigue, anxiety, headaches, nausea, nervousness, and insomnia. [*]

I came across many reviews where people complained about strong headaches after supplementation of aniracetam. An easy solution is to combine it with a choline compound. Two great options are citicoline or alpha GPC.

Another important thing you can do to minimize the potential risks is to follow the recommended daily dosage.

Aniracetam is an unapproved drug, so there is no safe daily dosage. However, based on the studies, most people experienced positive effects at 1500 mg/day, taken in two doses. Many take the first dosage (750 mg) in the morning, and the second in the afternoon.

Aniracetam is fat-soluble, so you need to take it with some fats or food. The best way is to take it after a meal.

Aniracetam half-life is 1 to 2.5 hours, which means you could take it in the afternoon without risking insomnia.

I personally haven’t tried aniracetam yet due to the lack of studies, so I cannot recommend an effective and safe daily dosage.

So, what do people think about supplementing aniracetam? Here I share a few user reviews:

“I’ve been taking ~700mg of aniracetam, usually with fatty foods (but no choline), once each day for the past seven days. I haven’t yet felt any recognizable effect.”

“Crazy! I’m also no stranger to drugs (or at least wasn’t in college) and ani has been the only racetam I’ve tried that hasn’t given me a slight visual reminder of those times. I’m going to write a report on my last two weeks with ani soon, but in sum: was great at first, not so much anymore.”

“I’ve been taking aniracetam for over a week now. Not a damn thing has changed. I’m beginning to wonder if you’re previous experimentation with psychedelics/dissociatives has made your brain more receptive/sensitive to aniracetam or racetams in general. I have not done any drugs other than aniracetam (2.5mg/day) and again, no effects.”

“Instead, aniracetam seems to have this similar effect to focalin in that it kills boredom, laziness and gives you a certain sense of purpose. I expected the effect to be long gone after the drug is metabolized but it seems to linger on the next day.”

As I expected, most people don’t feel any effects. Also, most people believe that aniracetam did not improve their performance. On the other hand, I couldn’t find many reviews about people complaining about the side effects, which is definitely positive.

Many recommend stacking aniracetam with other effective nootropics. Here I share a few potent nootropics that you could stack with aniracetam.

It is a well-researched natural nootropic that provides multiple benefits for peak performance.

Bacopa (Bacopa monnieri) is a traditional Ayurvedic herbal remedy. It is used as a brain-boosting supplement that improves memory, attention, thinking, and processing speed. Similar to aniracetam, Bacopa is used with patients that have Alzheimer’s disease. On the contrary, supplementing this nootropic enhances memory in healthy individuals as well.

Phosphatidylserine (PS) is a natural protein found in cell membranes. As a nootropic, it boosts cognition, focus, learning, memory, and concentration. It also influences neurotransmitters and helps children with ADHD. [*]

Ginseng is another adaptogenic herb known for several cognitive benefits. [6] This herb has been used for centuries to decrease our stress levels, improve energy, and boost our immune system.

If you don’t want to supplement aniracetam, you can just take the natural nootropics for optimal cognition. All of the mentioned brain nootropics are more effective, well-tolerated, and safer compared to aniracetam. Click here to learn more about other brain nootropics.

Where To Buy It

If you still want to experiment with aniracetam, you can buy it here. Before you order it, check if it is legal in your country.

As I mentioned before, I do not recommend buying and experimenting with this drug.

Aniracetam is a synthetic compound that modulates AMPA receptors. Its mechanism of action is not well-understood and we lack studies to confirm aniracetam efficacy and safety. A small number of studies show potential effects on people with Alzheimer’s disease, but we lack studies that would show cognitive enhancement for healthy people. Aniracetam is not side-effects free, so it is not a typical nootropic. Just the contrary, aniracetam is considered a drug by FDA.

Aniracetam is illegal for sales, user reviews are suboptimal, and it lacks research. Therefore, we do not recommend supplementing it.

There are many effective nootropics on the market that are safe, effective, and legal. Sadly, aniracetam is not one of them.

If you want to improve your cognitive performance, click here and check our top-rated nootropic stacks.