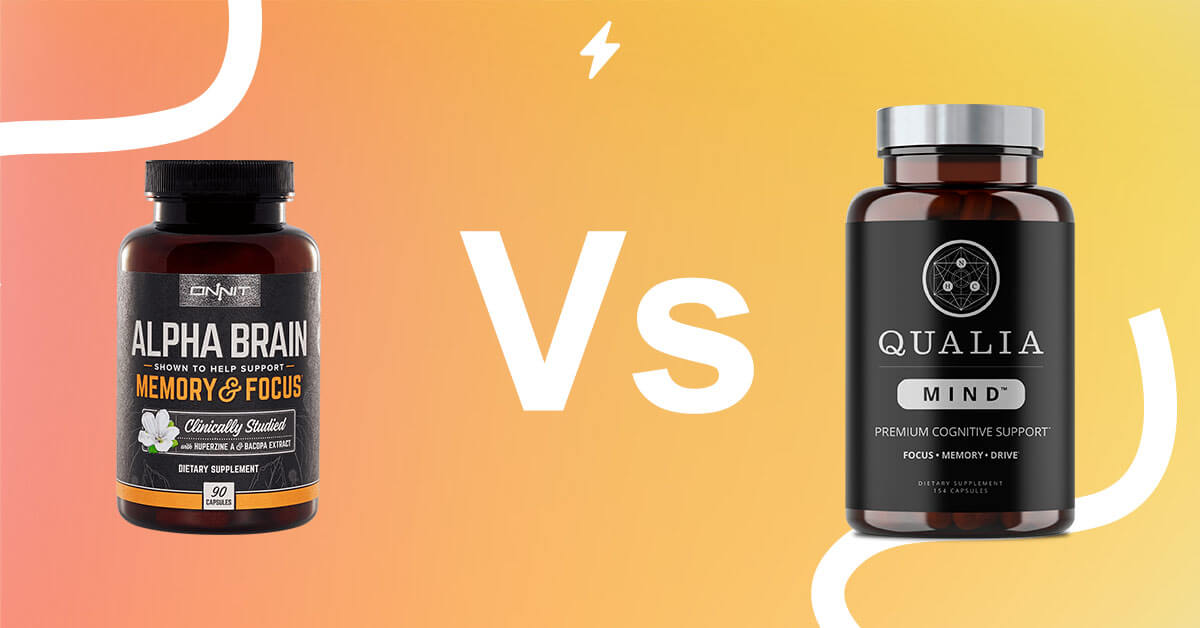 Alpha Brain and Qualia Mind are two very fascinating nootropic stacks. While Alpha Brain used to be one of the best-ranked nootropic supplements on the market, Qualia Mind showed a reliable performance in the past years. But which one do we prefer? Here is our full Alpha Brain vs. Qualia Mind comparison.

Contents show
1 Alpha Brain VS Qualia Mind
2 Similarities
2.1 1. Both supplements are high-quality and well-recognized
2.2 2. Do you search for high-quality nootropics? You just found them
2.3 3. Both supplements target high-performers with bigger budgets
3 Differences
3.1 1. Qualia Mind has a more complex and advanced formulation
3.2 2. Pricing
3.3 3. Overall Performance
4 Which Supplement Wins?
4.1 Where To Buy It?
5 Verdict

We were looking forward to this exciting comparison among two best-sellers: Qualia Mind and Alpha Brain. When we started reviewing nootropics in 2015, everyone was talking about Alpha Brain, while Qualia didn’t even exist.

Years later, Qualia supplement are more popular, while Alpha Brain seems to be losing its market share. It looks like Qualia is taking the position of Alpha Brain.

But that doesn’t mean that Qualia Mind is better than Alpha Brain by default. Or is it?

Anyhow, this is a tough comparison for several reasons. Before we announce the winner, let’s reveal the similarities between both supplements.

1. Both supplements are high-quality and well-recognized

Both companies are recognized as companies, which are developing premium supplements. And their flagship nootropic stacks show their real power.

2. Do you search for high-quality nootropics? You just found them

There is no doubt that both supplements contain high-quality nootropic compounds. They are among the best supplements ever developed.

That’s why they are also ranked on our top 10 nootropic stack list.

It’s funny to think about it, but based on our research, it is evident that both companies decided to target people with bigger budgets.

And not just that, they both target high-performers – people who really want the best for themselves. You might think most companies do the same, but you would be surprised to see the truth.

Anyhow, what about the differences between the supplements?

Let’s check out why we recommend only one of these two nootropic supplements.

1. Qualia Mind has a more complex and advanced formulation

Did you know that Qualia Mind contains no less than 28 nootropics, while Alpha Brain “only” around 12?

While having more ingredients does not mean that one product is superior, there is a vast difference between both you should be aware of. Qualia Mind is, without any doubt, a more complex supplement.

Since Alpha Brain contains less than 50% of the nootropic compounds that Qualia Mind, it is by far a more affordable one.

During our tests of both supplements, Qualia Mind showed to be the better product. By all means, Qualia Mind is a more refined nootropic stack.

It contains more nootropics. It is better dosed. It provides better effects, which last longer. Short-term effects are much more noticeable compared to those from Alpha Brain.

Qualia does make you more focused, improves your mood, and overall productivity.

Also, many people report feeling sick when supplementing Alpha Brain. We didn’t have those issues, but it’s something important to mention.

So in terms of performance, Qualia Mind is much better.

Based on our detailed research and review of both supplements, Qualia Mind is the winner. Alpha Brain hasn’t been optimized for way too long, it doesn’t have an open-sourced formula, and too many people report sickness when supplementing it.

Even though it’s more affordable than Qualia Mind, it is simply not as good.

So, if you are searching for the best nootropic supplement among the two, go for Qualia Mind.

Where To Buy It?

To get Qualia Mind, click below for the lowest price:

Don’t forget to use the coupon code YOURINCEPTION for the 15% discount.

Sometimes it is hard to prefer one product against a fierce competitor. And this comparison was, without a doubt a very challenging one. But if you consider all the essential factors, Qualia Mind is a better product among the two. That’s why it wins this test.

2 thoughts on “Alpha Brain Vs Qualia Mind: Which Nootropic Wins?”