Are you searching for a quality nootropic supplement? Alpha Brain and Neuro Peak are two contenders competing to win this race. Which is better? Read my complete Neuro-Peak vs Alpha Brain comparison to find out. 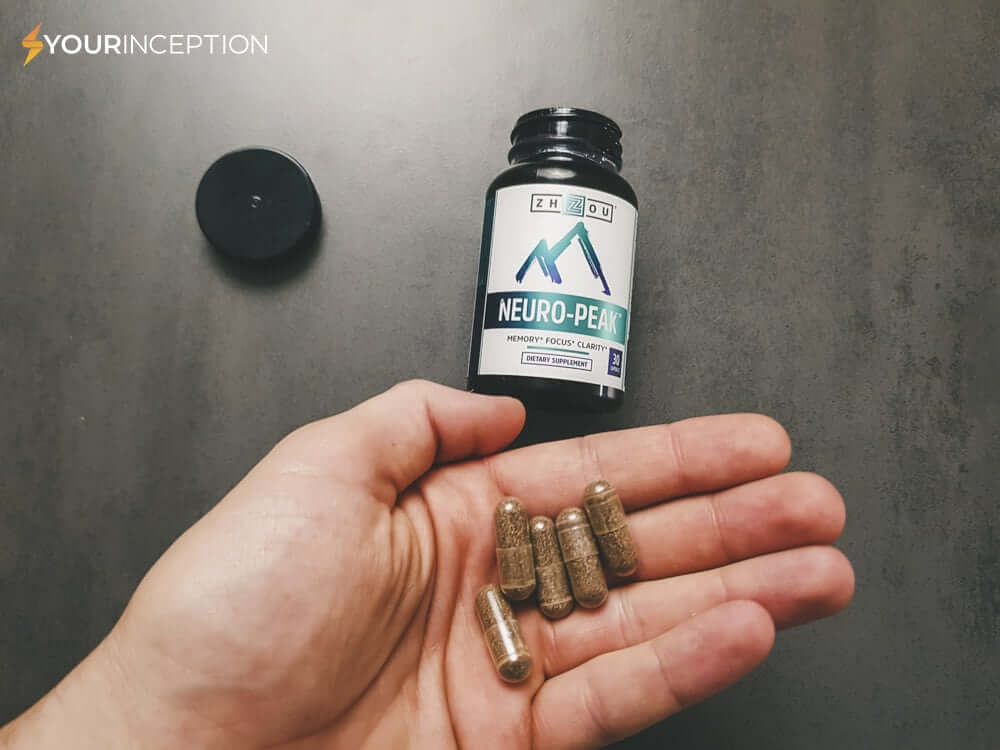 Neuro-Peak by Zhou Nutrition is one of the most affordable nootropic stacks on the market designed to enhance cognition, improve memory, provide better mental clarity, and help control stress.

Neuro-Peak contains some amazing nootropics like Bacopa monnieri, phosphatidylserine, and Rhodiola Rosea. It also contains some low-quality compounds like DMAE. In addition, Huperzine A is known for causing side effects, so it is not an optimal compound.

However, at its low price of $14.99 for 30 servings, Neuro-Peak definitely has a strong advantage over Alpha Brain.

Neuro-Peak may boost mental energy, alertness, memory, focus, and clarity. However, my detailed review of ingredients shows that it is hard to expect many benefits from this supplement.

Overall, Neuro-Peak is a low-quality nootropic supplement that cannot provide the promised effects.

Neuro-Peak was designed for the masses who cannot afford to buy a quality brain supplement. The recommended daily dosage is 1 capsule.

It is debatable if Neuro-Peak is side-effects free. Neuro-Peak contains two problematic nootropics (Huperzine and ginkgo biloba) that can cause:

What Is Alpha Brain?

A randomized, double-blind, placebo-controlled study showed the use of Alpha Brain for 6 weeks significantly improved verbal memory and executive functions in healthy adults. [*]

Some of the ingredients like l-tyrosine, Alpha GPC, and phosphatidylserine are outstanding. It also contains some underresearched compounds like oat straw extract, pterostilbene, and cat’s claw extract. Sadly, it also contains Huperzine (from Huperzia Serrata), which needs to be cycled and can cause some side effects.

Alpha Brain provides many benefits like enhanced focus, improved executive function, improved memory, and prolonged flow state. Ingredients are mostly high-quality and well-dosed, so you can expect the promised effects. Alpha Brain can increase the levels of crucial neurotransmitters that can increase alertness, focus, and energy.

Supplementing Alpha Brain not only helps you get more focused, but it prolongs the state of being in the flow, which leads to improved executive function. People also report being in a better mood after taking Alpha Brain pills.

The recommended daily dosage is 1-2 capsules of Alpha Brain in the morning with food. I recommend taking the capsules with breakfast to avoid potential side effects. As a matter of fact, many people experience unwanted side effects with Alpha Brain:

There are many theories about what causes the side effects. The most logical one is simply the risky combination of potent nootropics that lead to too much choline in the brain. The other is the use of nootropics like Huperzine.

I never experienced any side effects with Alpha Brain, but my team members did headache and mild nausea, so you need to be careful.

What do Alpha Brain and Neuro-Peak have in common? Let’s check out. 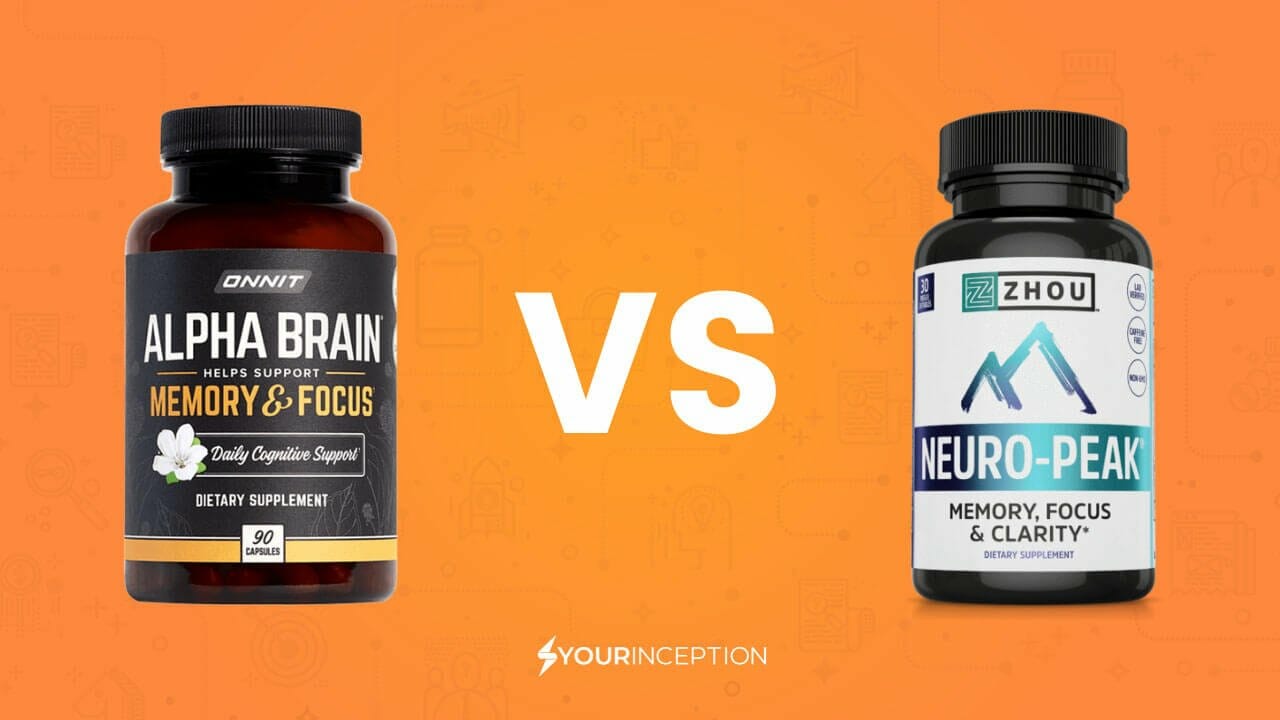 Both supplements were developed to enhance mental performance. In theory, both supplements can do it, but my research showed that only Alpha Brain can significantly enhance cognition.

Neuro-Peak is too underdosed to do that. If you search for a potent supplement, Alpha Brain is the winner.

Both supplements can cause some side effects. Alpha Brain is known to cause anxiety, stomach pain, and headache. Neuro-Peak is more known for causing nausea. Sadly, none of the supplements is completely side-effects-free.

To minimize the risk, follow the recommendations and take the capsules with food.

Low-quality nootropic supplements usually contain stimulants like caffeine so that the users can feel some effects when supplementing them. Luckily, both supplements are stimulant-free, which is a big advantage.

How about the differences between both supplements?

It is funny that the lower-quality Neuro-Peak exposes the amount of each nootropic in their supplement, while Alpha Brain hides it in proprietary blends. You should know that Alpha Brain was developed around 2015, and it has been long on the market. Since it has been one of the first nootropic supplements ever developed, they wanted to protect their formulation.

Nowadays, the standards are completely different, and most brands show the amounts of ingredients in their supplements. I am more careful with stacks that have proprietary blends.

One Alpha Brain bottle with 90 capsules costs around $79.95. One bottle of Neuro-Peak costs only around $14.95. Hands down, Neuro-Peak is way more affordable than Alpha Brain.

But how can there be such a price difference? The reason lies in the quality and dosing of nootropics. Alpha Brain contains more high-quality extracts, while Neuro-Peak contains more low-quality ones.

Alpha Brain is a bit overpriced, but it contains some of the more quality ingredients which are also more expensive. I prefer to take overpriced and quality supplements to low-quality and underpriced ones. It is just safer and more effective!

As I mentioned, not all Alpha Brain ingredients are perfect, such as Huperzine A & Cat’s Claw extract. But in general, they are more high-quality, more bioavailable, and potent than Neuro-Peak ingredients. Between both nootropics supplements, Alpha Brain wins. However, there are still better nootropic supplements than Alpha Brain on the market.

4. Developed And Recommended By Experts

Onnit, the brand behind Alpha Brain, is one of the most trustworthy supplement brands in the US. It has a huge team of experts that are developing its supplements. Its products are recommended by some of the world’s most influential health experts.

On the other hand, Neuro-Peak has a small team of mainly marketers and sales experts, so it is hard to expect that they could, in terms of research and quality, compete with Onnit.

So, which nootropic supplement is better? Comparing Alpha Brain to Neuro-Peak is in many ways hard. It is like comparing a BMW to Renault – it is almost impossible to compare them. While Alpha Brain is not a perfect supplement, it wins in almost every category. It is two levels better than Neuro-Peak. If we had to choose only one supplement between the two, there is no doubt we would choose Alpha Brain.

But since there are many other supplements on the market, we prefer even better stacks than Alpha Brain. Click here to check our top-rated nootropic supplements.

LIMITLESS PERFORMANCE IN YOUR INBOX