Adderall is a prescription medication that is used to treat attention deficit hyperactivity disorder (ADHD). Due to its potency, many students and high-achievers use this drug as a stimulant for cognitive benefits. Optimind, on the other hand, is a nootropic supplement developed to help people improve brain function. But which is better? Read my comprehensive Optimind vs Adderall comparison to find the true winner. 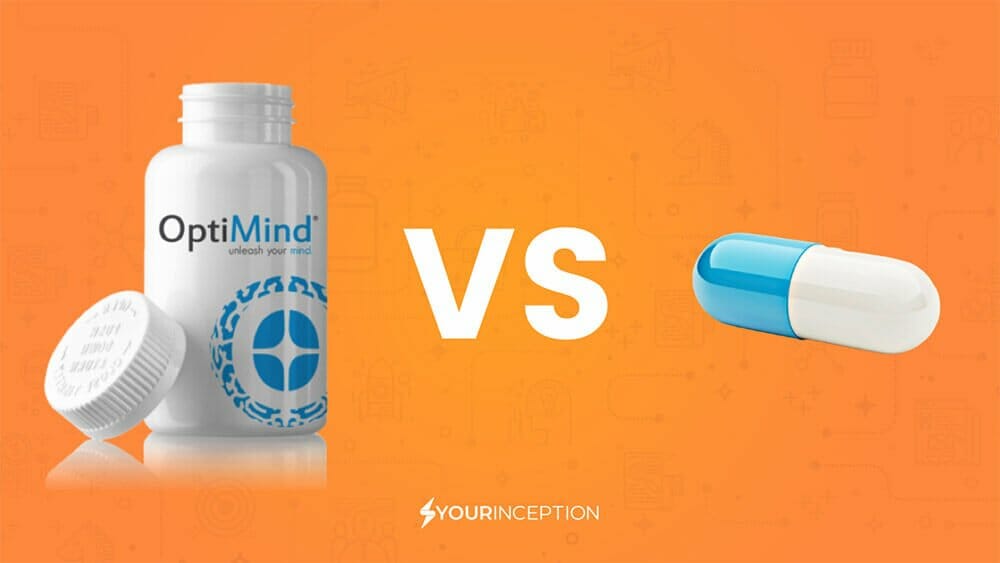 Contents show
1 What Is Adderall?
2 What Is Optimind?
3 Similarities
3.1 Used By Students & Professionals
3.2 Used For Focus And Mental Performance
3.3 Noticeable Effects
3.4 Short-Term Benefits
4 Differences
4.1 Adderall Is A Prescription Drug
4.2 Adderall Is Not Side-Effects Free
4.3 Optimind Is A Nootropic
4.4 Optimind Is Legal
4.5 Optimind Improves Memory
5 Which Is Better?
6 Verdict

Adderall is a stimulant drug that can increase the activity in your prefrontal cortex. [*] It helps people stay focused, pay attention, and improve their learning skills. It is also used to treat narcolepsy, a sleeping disorder.

Adderall is considered a smart drug – a partly legal substance for boosting mental performance in healthy individuals. According to the Addiction Center, Adderall is most often abused by athletes, students, professionals, and people with eating disorders. [*]

Adderall works by increasing the levels of three essential neurotransmitters – serotonin, dopamine, and norepinephrine. These are crucial neurotransmitters that influence your well-being and stimulate you. However, keep in mind that Adderall does not affect acetylcholine, the learning transmitter.

There is no doubt that Adderall can improve cognitive function, but this improvement comes at a cost. Sadly, Adderall is highly addictive. [*] Also, if you overdose on Adderall, you can suffer from side effects like chest pain, nausea, vomiting, fainting, fever, and uncontrollable shaking.

Adderall is one of the most popular smart drugs (alongside Modafinil) on the market. Due to its potency, many people prefer it to nootropics. The fact is that you can immediately feel effects when you take Adderall, no matter if you are a healthy individual or if you have ADHD.

But I do not recommend taking Adderall if you don’t get a prescription from your doctor. As a matter of fact, there are many great Adderall alternatives available on the market.

And what’s the situation with Optimind?

Unlike Adderall, Optimind is a non-prescription all-natural dietary supplement developed to improve mental function. It is packed with vitamins, minerals, and nootropics to boost energy levels, maximize focus, increase attention, and optimize your brain health.

Optimind is used by professionals, college students, and high-achievers who search for short- and long-term brain support.

With all-natural ingredients, this nootropic supplement provides a mild short-term boost. According to the founders of Optimind, you can feel its effects in about 30 minutes after supplementing.

While Optimind cannot treat ADHD, nor does it have any proven results, its active ingredients may provide all the promised benefits in healthy individuals. More importantly, Optimind can provide long-term benefits.

But the question is – which of the two compounds is better for you?

Let’s check the similarities between Adderall and Optimind.

Both drugs are used by students, professionals, and active people who want to boost their cognitive function. Both compounds are especially popular in start-up regions like Silicon Valley, where people work way beyond their capabilities.

Used For Focus And Mental Performance

Users take both compounds to enhance their focus, attention span, and mental performance. Both compounds can bring a positive mood, improve focus, and even motivate.

There is no doubt that Adderall provides way stronger effects to Optimind. However, according to my review, it is possible to feel weak effects by supplementing Optimind as well. The effects happen due to the mix of nootropics and caffeine.

The fact is that both compounds may provide short-term effects.

Despite a few similarities, there are many differences between the compounds. Let’s check them out.

Adderall Is A Prescription Drug

The main difference is that Adderall is a prescription drug, whereas Optimind is a natural supplement. Even though Adderall is considered a smart drug, there is a huge difference between smart drugs and natural dietary supplements. Keep in mind that by definition, nootropics are side-effects free.

Adderall Is Not Side-Effects Free

As a matter of fact, taking Adderall can bring many unwanted side effects, whereas Optimind is side-effects free if you follow the recommendations. Not just that, you can get addicted to Adderall, which can result in withdrawal symptoms if you decide to stop taking it.

Basically, Adderall is extremely dangerous for long-term use.

Optimind Is A Nootropic

Adderall only provides short-term positive effects, whereas long-term use (if not prescribed by a doctor) is not recommended.

Optimind contains a Bacopa Monnieri extract, an adaptogen herb that can improve memory in healthy individuals. [*] Despite the common belief among college students that Adderall can boost memory as well, this hasn’t been proven yet.

Comparing Optimind and Adderall is though because they are in different leagues. If you have ADHD and no other natural substances help you, then Adderall is the better option. Of course, you can naturally treat ADHD using nootropics, but Optimind is far from a perfect nootropic stack for that.

If, on the other hand, you want to boost cognitive performance without adverse effects, then Optimind is a better option. With the ingredients like Bacopa monnieri, l-tyrosine, l-taurine, phosphatidylserine, and other ingredients, Optimind may stimulate your central nervous system more safely.

However, I do NOT recommend supplementing Optimind for cognitive performance. The reason for that is that there are way better nootropic supplements on the market. Read below my verdict to learn more.

Optimind vs Adderall is a complex comparison of a drug and a supplement. As we discovered during our review, Adderall is potentially effective for ADHD, but it is unsafe for long-term use.

Optimind is safer for long-term use, but it is fairly ineffective. It contains a proprietary blend of potent nootropics, but it is underdosed to be very effective.

If you care about your brain function, want to boost your focus, attention, energy, and memory, then I recommend taking one of our top-rated nootropic supplements.

Get The Best Nootropic Supplement

LIMITLESS PERFORMANCE IN YOUR INBOX