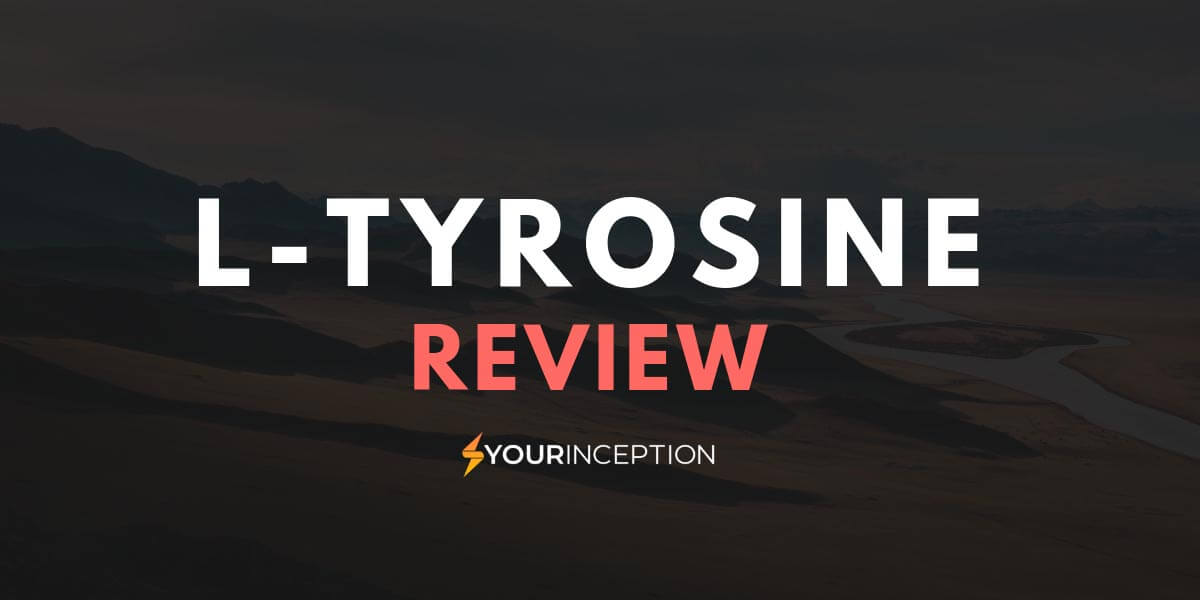 L-Tyrosine is an amino acid that might prove itself to be a respectable nootropic and not just a muscle builder. What are the main benefits of supplementing it, how about the side effects and recommended daily dosage? Check out my full L-Tyrosine review.

Here’s a quick lesson in amino acids before we take a closer look at Tyrosine.

Amino acids are the building blocks of protein, a macronutrient responsible for building and retaining muscle mass, strengthening your bones, hair, nails, and improving your blood parameters.

There are two types of amino acids:

L-Tyrosine is an essential amino acid, found in various protein-rich foods, such as chicken, turkey, fish, milk and other dairy products, peanuts and almonds, as well as avocados and bananas.

It is usually used by people who wish to improve their cognitive performance while performing mentally or physically demanding tasks.

You can use L-Tyrosine when you’re studying or just to get better focus during your workouts.

Since we are already on the topic of working out, L-Tyrosine is often used in fat-burning supplements as a secondary ingredient.

This means adding L-Tyrosine to your diet may also indirectly contribute to fat loss.

But what are other benefits of supplementing L-Tyrosine?

Tyrosine is involved in the production of catecholamines, also known as the neurotransmitters dopamine, noradrenaline and adrenaline, which are responsible for the “fight or flight” response.

Tyrosine gets broken down by the body in two stages.

First, it needs to be synthesized into L-DOPA (a precursor of dopamine and a common nootropic that has benefits similar to those of Tyrosine). Then it is converted by enzymes and replenishing one of the three catecholamines.

For L-Tyrosine to have a beneficial impact on our cognitive function, the cognitive tasks must first be challenging enough to deplete our neurotransmitter stores in the first place. [1]

When presented with cognitively demanding tasks, studies on cold stress and sleep deprivation have shown that L-Tyrosine acts as a buffer that prolongs the anti-stress effects of noradrenaline by delaying its depletion.

This is also the most prominent characteristic of L-Tyrosine.

When we expose our bodies to uncontrollable acute stress, the concentrations of norepinephrine usually take a dip. And this results in unwanted reduced motor control and in some cases, unwanted aggression.

Among others, a recent study on military cadets has proven Tyrosine to be an effective stress reliever, as it had a profound effect on the mood of the individuals during a week-long intense combat training course. [2]

L-Tyrosine is also a common pharmaceutical solution for individuals who have dementia. Catecholamine levels with such individuals are usually decreased, so on the basis of its catecholamine producing properties, supplementation with Tyrosine proves to be a good neuroprotective agent.

Tyrosine, in isolation, will not necessarily give you a mental boost.

It will prove beneficial if you find yourself in situations where your natural catecholamines will be depleted by providing more material (Tyrosine) to make catecholamines from.

Let’s have a look at the main L-Tyrosine health benefits more in details. 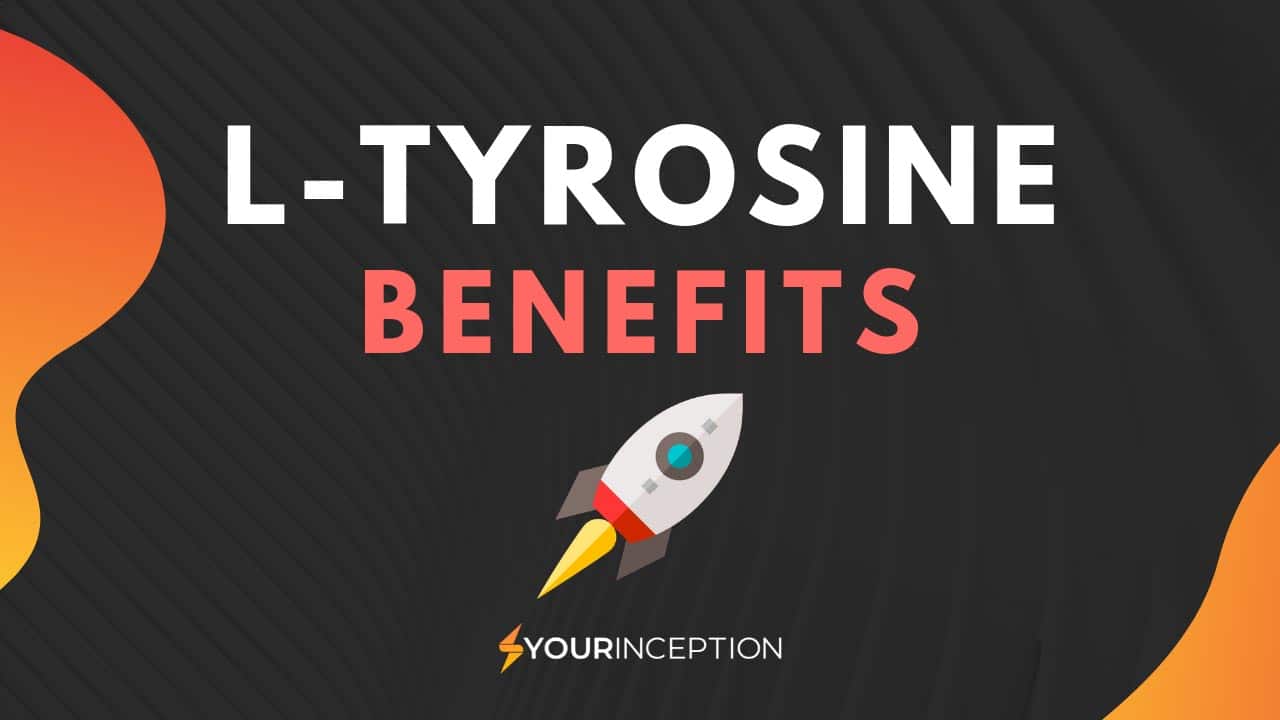 Several studies are proving the benefits of supplementing L-Tyrosine on our mental performance and cognition.

In another study (also of 22 participants), L-tyrosine was able to enhance cognitive flexibility. [4]

However, keep in mind that L-Tyrosine only improves our mental performance whenever we work in stressful situations.

In one of the studies I came across, I was able to find that L-Tyrosine helps people who are sleep deprived.

People who didn’t sleep during the night and were given tyrosine stayed alert 3 hours longer than others. [5]

Studies show that supplementing L-Tyrosine was associated with improvements in mood.

While blood pressure and heart rate didn’t change, it was seen that L-Tyrosine helps with decreasing the side-effects associated with stressors. [6]

One study showed that military cadets that were given up to 10 g of L-Tyrosine/day had reduced blood pressure compared to people who were given a placebo. [7]

A study was done on eight individuals that were given 150 mg/kg of Tyrosine/day during acute stress. [8]

Those people were able to preserve working memory, which was entirely unexpected. 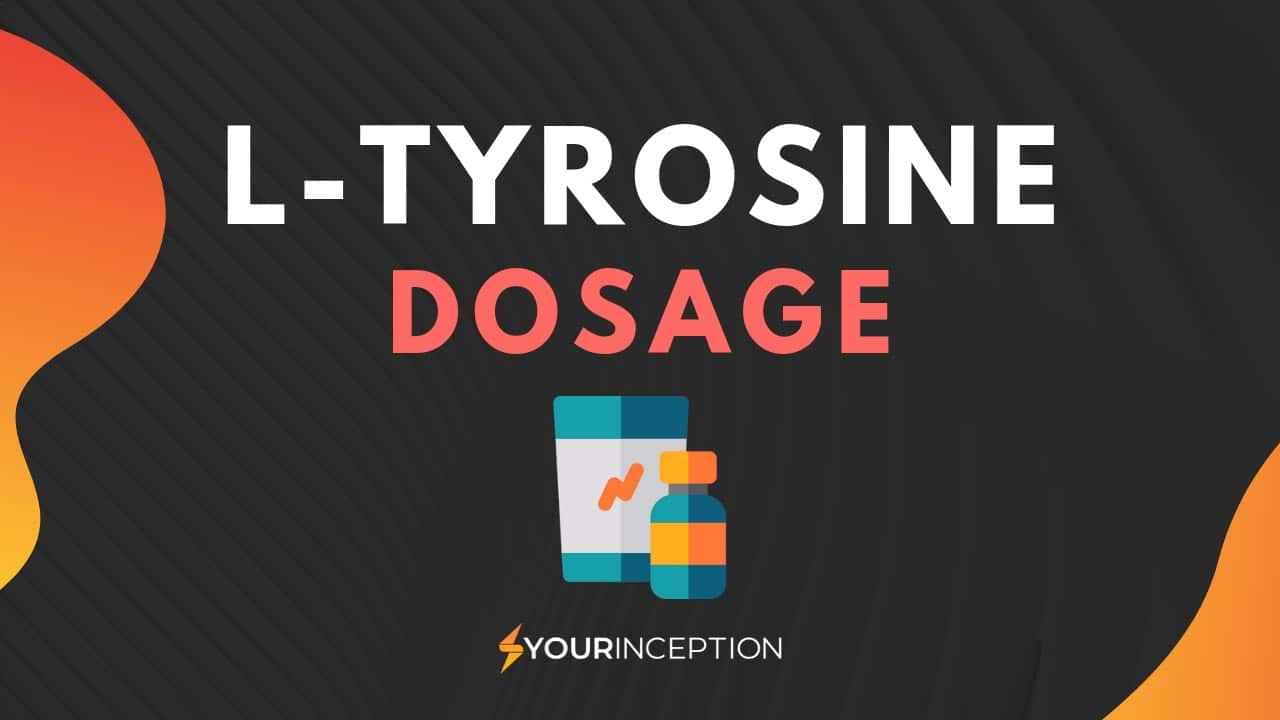 L-Tyrosine has been generally recognized as safe for short-term use at a dose of up to 150 mg/kg of body weight, or up to 12 g a day for up to three months.

This means you should take at least a few weeks’ breaks before getting back into supplementing with Tyrosine.

If Tyrosine is only used on certain occasions, it can be administered at dosages ranging from 500 mg up to 2000 mg.

Take it approximately 30-60 minutes before your exercise or hard mental work.

This is the optimal recommendation due to the L-Tyrosine half-life, which is 1-3 hours.

L-Tyrosine maximum dosage is 2000 mg/day. If you take more, you can expect adverse side effects and typical overdose symptoms such as nausea.

If you find yourself having gastrointestinal problems when taking such large quantities, split up the Tyrosine into two smaller doses, taken 60 and 30 minutes before the acute stress. 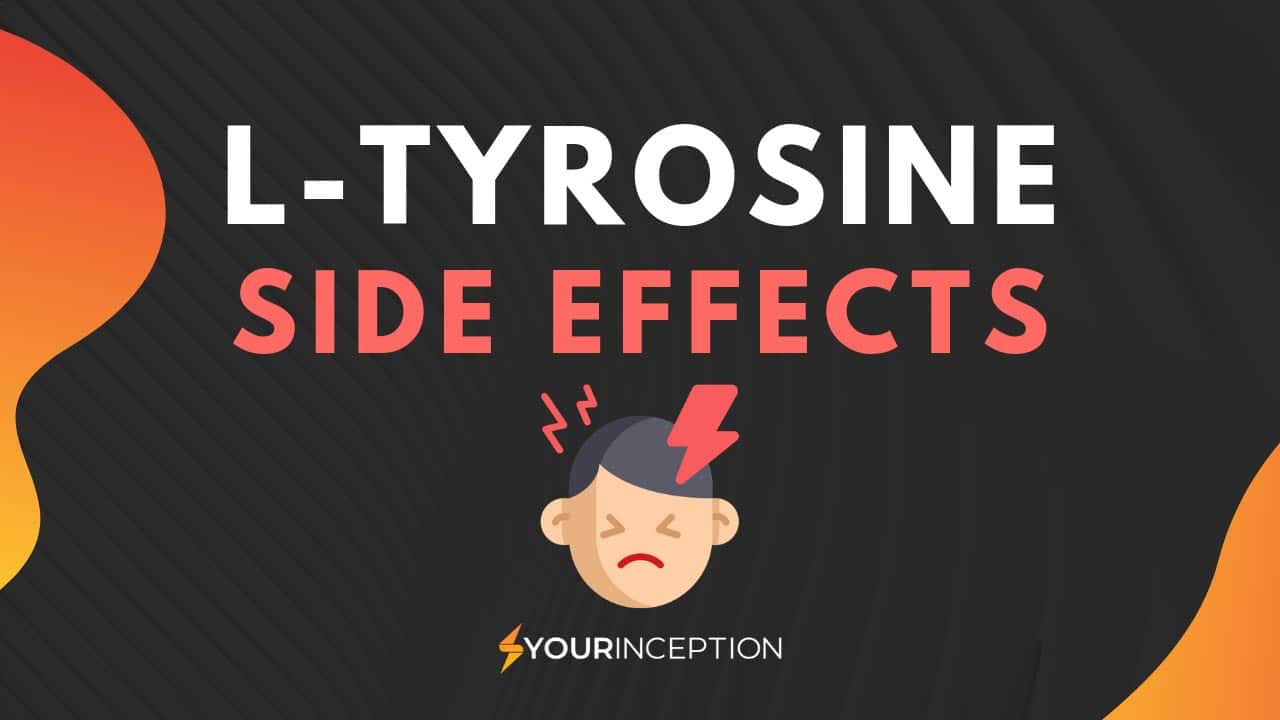 Along with the mentioned cognitive benefits, Tyrosine can also lower the diastolic blood pressure in doses up to 100 mg/kg.

However, certain people have suffered from elevated blood pressure levels when taking in more than 150 mg/kg.

If you have preexisting issues with elevated blood pressure, it’s best to avoid L-Tyrosine.

Other L-Tyrosine side effects include:

This only happens in extreme cases of use, where dosages exceed the recommended daily intake.

L-Tyrosine overdose is rare, but if it happens, do consult your doctor.

How To Stack L-Tyrosine?

L-Tyrosine supplement can be a standalone cognitive enhancer, but more often than not, it is better to use it as a supplemental part of your nootropic stack rather than its focal point.

That said, to get the most out of your Tyrosine, I’d recommend stacking it with two additional compounds – L-Tryptophan and 5-HTP.

1. L-Tryptophan is a naturally occurring essential amino acid that, once ingested, get absorbed into the body as 5-HTP.

5-Hydroxytryptophan is a precursor of the neurotransmitter serotonin, meaning it directly affects the body’s serotonin levels and in turn produce the feelings of happiness and well-being.

It’s easy to see why people have been taking it for years when battling depression.

Take 5-HTP for extended periods, however, and you might end up with depleted dopamine levels.

This is where Tyrosine comes in – it acts as a safety net for people on 5-HTP to prevent them from upending their sometimes fragile brain chemistry.

L-Tryptophan, when taken for anxiety relief has been proven effective in doses of 500-1000 mg per day, and 5-HTP in daily doses of 150-300 mg, but the latter needs to be taken for 2-6 weeks before taking a couple weeks’ break.

When it comes to dosages, all the numbers are general recommendations, as everyone’s brain chemistry differs and you will need to do some trial and error.

Let’s now turn our attention to what other users have to say about L-Tyrosine:

“I’ve had L-Tyrosine supplement for awhile. I’d occasionally take it without noticing anything; so it pretty much collected dust on the shelf. I decided to work my way back to it; I’ve been battling a severe cold and needed a “pick me up”. So I’ve been taking 1,000mg of it about three times a day since Sunday. It has been fantastic, giving me a silky smooth flow of energy, motivation, stress relief and general happiness.”

“I was having bad reverse reactions to every depression medical given to me. I happened across L-Tryosine in a health food store and since using it my ability to concentrate has shot up and I have around the clock energy. I am more positive and my ability to control my emotions has also improved. “

“For the past 6-8 months I have been getting bouts of minor depression that were seemingly spontaneous. Having a bad mood, negative thoughts, being quiet, no excitement, etc…I do a google search and read something about epinephrine which leads me to tyrosine, something my gym-going brother keeps in the kitchen cabinet. I take about 300-500mg only one time and I just felt like my normal self after about an hour :) Guess I had an epinephrine deficiency or something.”

“I and a lot of people I advise have found Tyrosine to be great for rapidly overcoming caffeine addiction. A gram or two a day for a few days usually does it. Not sure how much value there is in supplementing it every day forever. “

“It’s not bad at all. Wakefulness lasting for 3-5 hours in my experience. Also, do not take with food. Had some of the worst intestinal pain I’ve ever experienced after taking it with food. “

It seems like people really enjoy supplementing L-Tyrosine, and luckily, most of them experience no side effects. 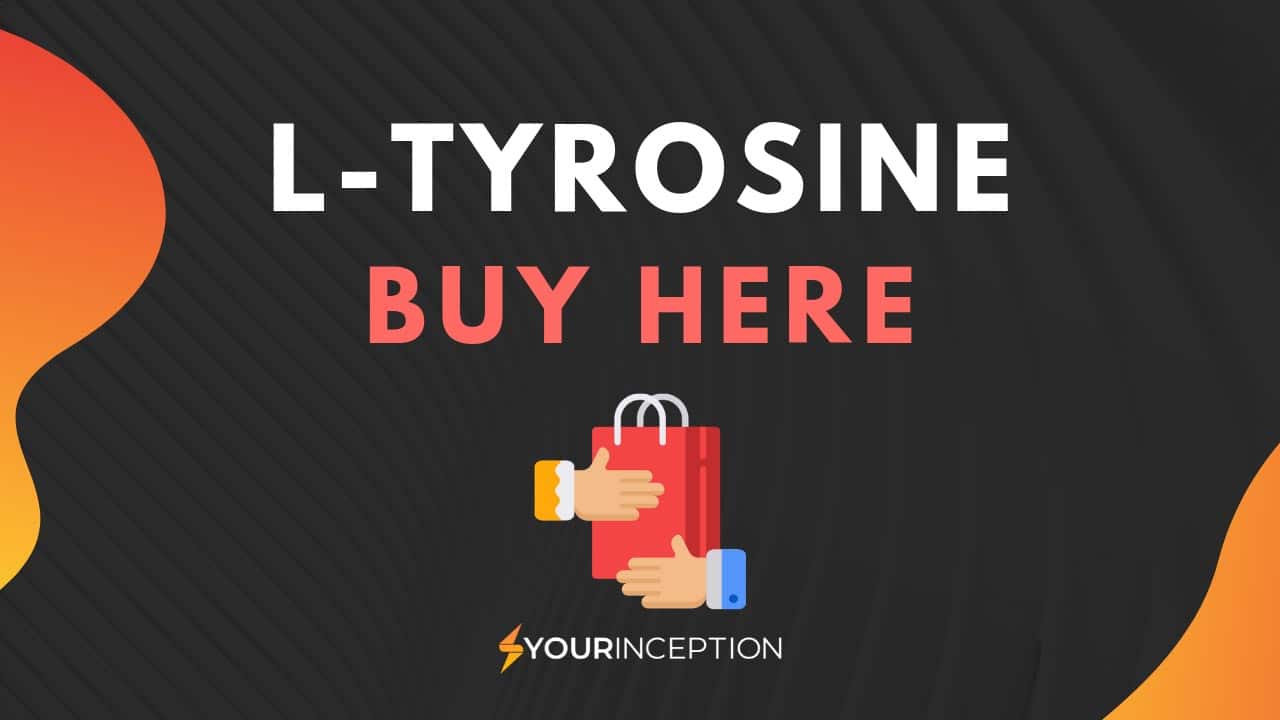 Where to Buy L-Tyrosine?

It is reasonably easy to get your hands on L-Tyrosine supplements. Most well-stocked health and sports nutrition shops will sell it from different manufacturers, but if you prefer to get your nootropics online, there’s a way of doing that too.

Even though it’s ‘just’ an amino acid, most nootropic vendors will also have it in stock, so I recommend you stick to the vendors you can trust.

If you’re looking for capsules or powder, here is my favorite vendor.

Since L-Tyrosine is a well-known nootropic, it is no doubt that some of the best nootropic stacks contain it – here is my favorite that include L-Tyrosine: Mind Lab Pro.

N-Acetyl-L-Tyrosine is the best form of L-Tyrosine. It is easily absorbed, and it delivers better nootropic benefits than just Tyrosine.

2. Is L-Tyrosine a stimulant?
No, L-Tyrosine is not a stimulant. However, because it boosts the production of dopamine, noradrenaline, and adrenaline, Tyrosine may cause a slight buzz, comparable to that of drinking a cup of coffee.

4. Does L-Tyrosine help you tan?
Yes, Tyrosine can help you tan. Melanin is made from Tyrosine and taking 1000 – 1500 mg of this each day as a supplement with the help of appropriate vitamin C and B6 levels you can develop a healthy natural tan.

5. Does L-Tyrosine help with ADD?
Yes, L-Tyrosine may help with ADD and ADHD, since it produces three essential neurotransmitters. If you have ADD or ADHD, we recommend consulting your doctor before supplementing L-Tyrosine.

6. Is L Tyrosine safe to take?
Yes, current studies show that L-Tyrosine is possibly safe when taken by mouth in doses up to 150 mg/kg. To avoid side effects, do consult your doctor before the supplementation.