Neuro-Peak Review: Does This Nootropic Work?

Neuro-Peak Review: Does This Nootropic Work? 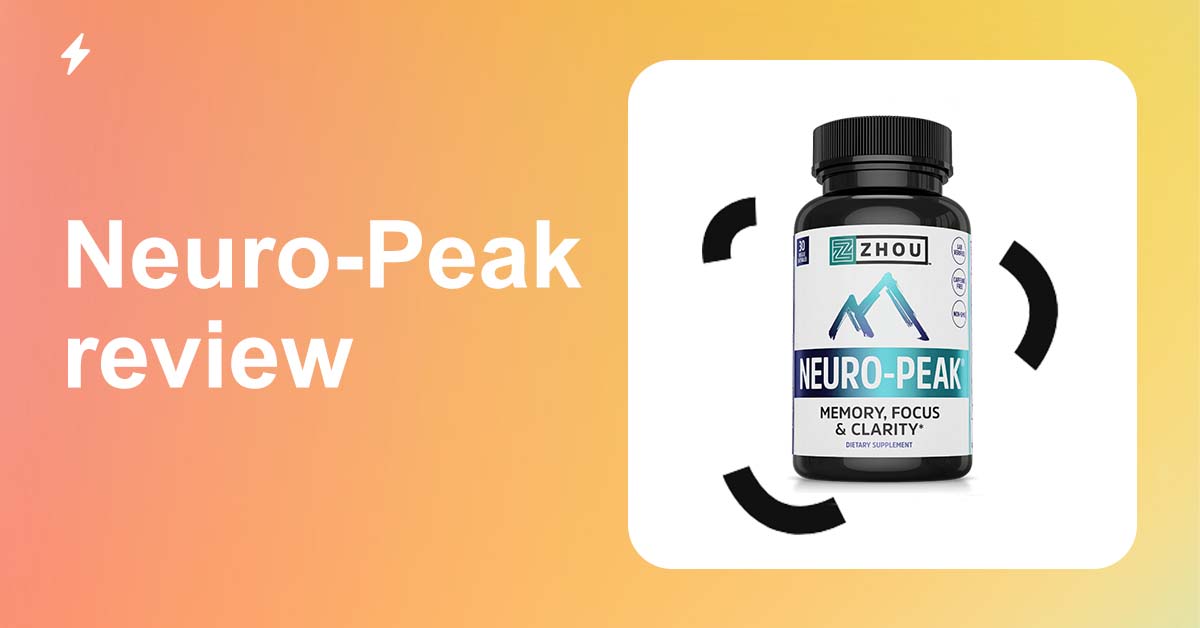 Neuro-Peak is an affordable dietary supplement designed to improve brain function, mental clarity, memory, and focus. But can it compete with premium nootropic supplements? And why exactly is it so cheap? Read my full Neuro-Peak review to learn more.

Zhou Neuro-Peak is one of the most affordable nootropic stacks on the market that was designed for:

This supplement was made by Zhou Nutrition, a company known for its wide range of affordable supplements.

Neuro-Peak is probably the most affordable nootropic supplement that I have ever tested. A monthly serving of 30 capsules costs only $14.99.

Based on my experience, under-priced supplements either don’t work due to being underdosed or the lack of potent nootropics. Underpriced supplements also contain lots of cheap fillers, low-quality capsules, and suboptimal production standards.

But what’s the case with Neuro-Peak? Did they find a magical formula, or is it another overvalued nootropic that you should avoid?

Let’s first analyze its ingredients and then check with Neuro-Peak review and experience.

Neuro-Peak nootropic stack contains gluten-free ingredients, and it is without caffeine.

Bacopa Monnieri is one of the most effective nootropics for long-term memory enhancement. Supplementing this adaptogenic herb can improve recall accuracy, speed, and retention. [*] It also decreases anxiety and stress levels. [*]

300 mg of Bacopa Monnieri is an excellent dosage, but this supplement does not contain a quality extract, which is the main issue. Don’t expect any memory benefits from Neuro-Peak.

Vitamin B12 is an essential vitamin for a healthy brain and body functioning. It also plays an important role in neurology. [*]500 mcg of vitamin B12 is a very high dosage. Most importantly, Neuro-Peak includes methylcobalamin, which is less absorbable than cyanocobalamin.

Phosphatidylserine is a naturally occurring fat substance (a phospholipid) found in our brain. It is an important nootropic for our cognitive functioning. Among other benefits, it can slow down our cognitive decline. [*]

7 mg of phosphatidylserine has absolutely no effect on human performance.

Ginkgo biloba is a nootropic compound that has been proven the most effective for the elderly who already suffer from cognitive decline. It can improve memory and blood flow to the brain. [*]

Ginkgo biloba is useless for healthy people. Studies show positive effects only in people who suffer from cognitive decline.

Rhodiola Rosea is one of my favorite anxiolytics. It is a very effective nootropic for decreasing stress and anxiety, crucial for top cognitive performance. [*]

DMAE is a choline molecule that can increase the levels of acetylcholine. [*] This is a neurotransmitter important for learning and memory. It may slow down cognitive decline, but we lack studies to confirm that.

DMAE is the worst choline compound on the market.

My Opinion About The Formula

No, Neuro-Peak doesn’t have a great formula. It contains some potent nootropics like bacopa monnieri, Rhodiola Rosea, and phosphatidylserine, but the dosages and ingredients quality is too low to expect any effects. 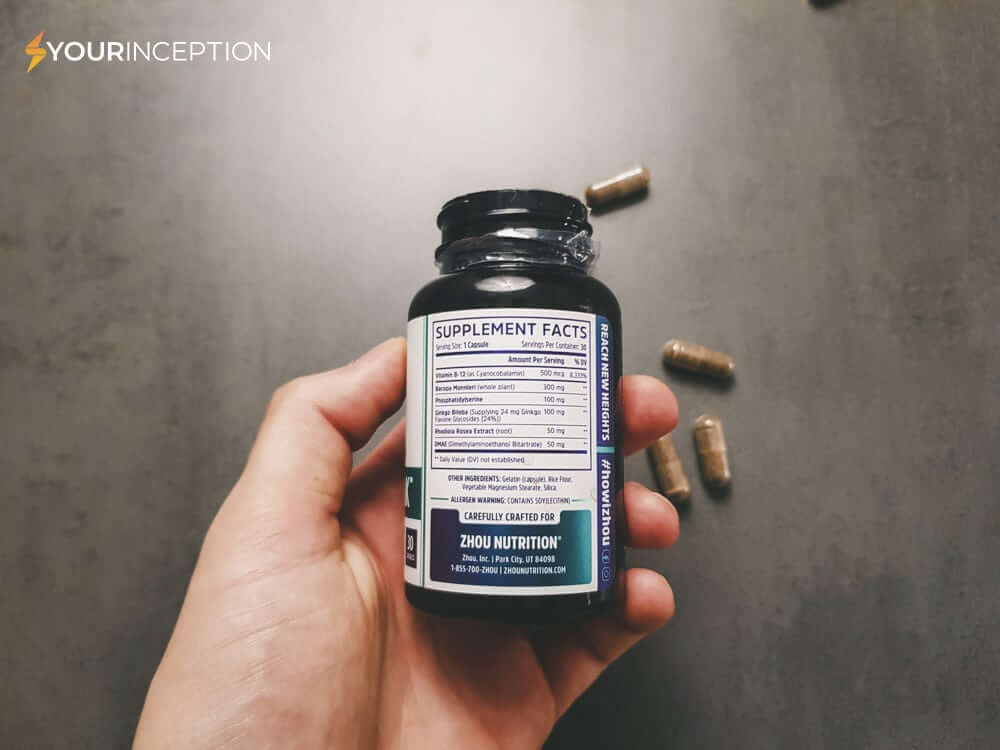 How about mental energy? Well, what exactly is that? I see it as an increase in cortisol levels, which results in increased mental or physical energy. Again, Neuro-Peak contains no such compound that could increase mental energy.

Sadly, Neuro-Peak contains a low-quality bacopa extract, so it is hard to expect any benefits.

To enhance focus and clarity, you need to increase acetylcholine and dopamine levels. The amount of phosphatidylserine is way too low to provide any benefits. When it comes to DMAE, we lack studies to confirm its efficacy. Therefore, it is hard to expect any benefits from Neuro-Peak.

I have also seen claims that Neuro-Peak contains highly bioavailable nootropics, which makes it potent and its effects reliable. This is as far from the truth as possible.

As I already explained, most nootropics in the stack are low-quality and less bioavailable compared to the nootropics found in premium supplements. This is the exact reason why this supplement is far from being a reliable one.

As we already discovered, Neuro-Peak is far from a quality nootropic supplement. One of its biggest downsides is its low price, which shows the use of low-quality compounds.

I am certain of that because a moderately-dosed brain supplement that contains quality nootropics costs about $10-15 to make. Yes, that is its production price. So how can Neuro-Peak be so cheap? Well, there are two main reasons: underdosed & low-quality nootropics, which are extremely affordable.

No matter how different reviewers try to spin the story, looking from a theoretical standpoint, there is no way that Neuro-Peak works.

But how does it work in real life? Is it better than in theory?

Despite its low price, I decided to give Neuro-Peak a try and see what happens.

Now, to be completely honest, I didn’t expect too much from it because it lacks some important nootropics that I want to see in every nootropic supplement. Also, most ingredients are somewhat lower quality than what I’m used to.

But that didn’t stop me from testing Neuro-Peak. Here’s what happened.
I decided to test Neuro-Peak for about a week. I started by taking 1 capsule per day in the morning.

I expected no short-term effects, and I didn’t get any. I didn’t feel more focused, more alert, more productive, or in a better mood.

No, Neuro-Peak didn’t surprise me in any way. But does that mean this nootropic stack doesn’t work at all? Is it complete garbage?

No, not necessarily. Compared to many other brain supplements, Neuro-Peak contains a few nootropics that are quite well-dosed. It contains a high amount of vitamin B12, bacopa monnieri, and ginkgo biloba.

But the big issues are the quality of those compounds and the dosage of other ingredients, not to mention that Neuro-Peak lacks certain nootropics for peak brain performance.

It contains Huperzine A, which can cause:

It is essential to cycle Huperzine A regularly. If you experience any side effects, stop taking it immediately.

Ginkgo biloba can also cause a variety of side effects like:

So you need to consult your doctor before using Neuro-Peak.

The suggested use is one capsule per day.

Due to an extremely high amount of some ingredients (such as vitamin B12, for example), I recommend sticking to 1 capsule per day. Even though it is a reasonably inexpensive supplement, be aware of the overdose.

As part of my review process, I searched for users’ feedback. During my research, I found a few positive and some negative reviews of Neuro-Peak users:

"I noticed a difference within a few days. I am 67 and still working and hope to for a few more years. I am working with much younger co workers so I need to keep up with them! I am finding I remember better and comprehend quicker than they do now! Thanks for this great product"

“It's great if you like stomach pain and loose stools. After a couple of days of taking Neuro-Peak I noticed that my stomach hurt and I had frequent diarrhea. Stopped taking it and a few days later I was back to normal."

“I love the way I feel. I don't have anxiety and have more memory and can accomplish so much more in a day. Before taking Zhou Neuro-Peak I didn't feel like doing anything. Now I'm on cloud nine."

Based on the reviews, most people exaggerate the positive benefits they get out of Neuro-Peak. When it comes to side effects, yes, I believe people actually experience adverse side effects with Neuro-Peak.

Where to buy Neuro-Peak?

If you want to buy Neuro-Peak, you can do it on their homepage.

However, I currently do not recommend buying Neuro-Peak.

Below you’ll find my reasoning for that and a few great alternatives.

Your Inception does not recommend supplementing the Neuro-Peak brain support supplement.

We have mixed feelings about Neuro-Peak Zhou Nutrition nootropic. On the one side, we believe it’s a decent nootropic stack among “affordable stacks.” On the other hand, it lacks some ingredients to get on our list of best nootropic stacks.

We believe the team behind this product is targeting people who want an affordable supplement that can provide some benefits (such as potentially better long-term cognitive performance), but nothing spectacular. The supplement lacks quality compounds, the dosages are too low, and its extremely low price tells you that something is off with this supplement.

Anyhow, if you are searching for excellent nootropic stacks that are well-dosed, safe, and much more effective, then check out the best stacks that we recommend. Click on the button below for more information.

Is Neuro-Peak A Scam?

No, absolutely not, Neuro-Peak is not a scam. However, it is a low-quality nootropic supplement developed for the masses.

No, Neuro-Peak does not provide the promised benefits due to its underdosed formulation.

Yes, Neuro-Peak is probably safe for short-term use. However, do consult your doctor before purchasing it.

Who Is Neuro-Peak For?

Zhou Neuro-Peak was designed for people who search for a quick shortcut to better brain performance and cannot afford to buy a quality supplement.

2 thoughts on “Neuro-Peak Review: Does This Nootropic Work?”