Performance Lab Caffeine Plus Review: Can It Do All It Promises?

Home > Nootropics Review > Performance Lab Caffeine Plus Review: Can It Do All It Promises?

Performance Lab Caffeine Plus Review: Can It Do All It Promises?

The first of its kind from the brand, Performance Lab Caffeine Plus is the first formula from the company that uses a stimulant as its main ingredient. Asserting to help activate the brain using caffeine, but without its typical side effects, can Performance Lab validate this claim? Let’s find out.

What is Performance Lab Caffeine Plus?

As a supplement brand, Performance Lab provides some of the highest-rated products in the nootropic market. So far, the company had avoided stimulants completely building their brand around purely non-stimulant products.

So, why the change of heart with a new stim product? Well, it seems that Performance Lab may have detected a gap in the nootropic market with the need for safe but effective and balanced stimulation.

But instead of putting together a multitude of stimulants, the company spent time devising a product that offers clean stimulation sans the jitters.

The thing to remember here is that Performance Lab Caffeine Plus (initially named Stim) is not intended to be an athletic enhancer. Sure, caffeine can potentially help with energy, endurance, and exercise intensity, but the very moderate dosage include in the formula caters more to cognitive enhancement.

The brand has other, far more effective pre-workout supplements for that purpose. If you experience some degree of athletic boost, it’s a welcome bonus but not the design of the product.

On the surface, Performance Lab Caffeine Plus seems like any other stimulant that helps users keep going when they want to work harder but also don’t want to drink coffee. But when you look deeper, it’s actually a brain supplement that doesn’t rely as much on caffeine as it does on the combination of expertly selected ingredients to give your brain the right boost.

With this formula, caffeine only acts as an instigator to get things going. The rest of the benefits come from what the other ingredients do synergistically. But to understand that a little better, you’ll have to take a closer look at what makes up the rest of this formula.

Caffeine Plus uses a clever combination of seven ingredients to give you what the manufacturers call the ultimate “clean energy experience.” This implies that yes, caffeine would do its part in all of this, but not in the way other stimulant-based products do.

Instead, Caffeine’s Plus subtle stimulant boost paired with other ingredients for recovery and balance will primarily target users at helping them: 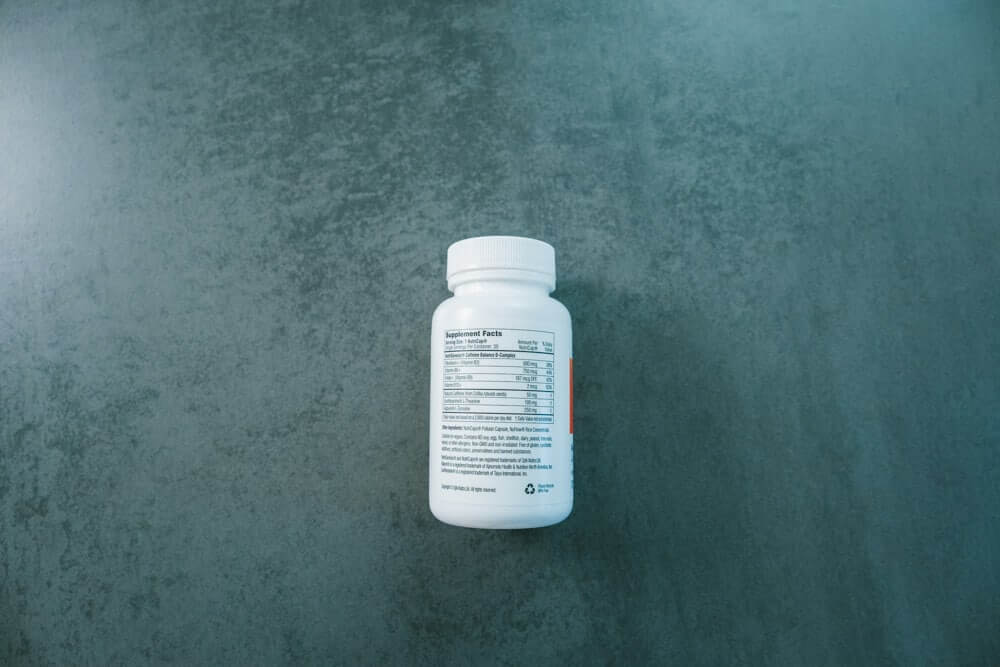 When manufacturers say natural coffee, they mean it isn’t caffeine anhydrous, which is the most common caffeine variety added to every sports supplement available.

This form of caffeine is inexpensive and readily mass-produced, whereas naturally sourced caffeine is harder to extract and adds to its production cost.

In its purest form, coffea robusta is coffee that hasn’t been roasted yet and is the form of caffeine Performance Lab Caffeine Plus uses in its formula for maximum potency.

With only 50 mg, Caffeine Plus gives you about the same jolt as a shot of espresso.

You get a stimulating, targeted dose but without going overboard. As such, you avoid the jittery side effects of coffee.

If any substance is the perfect anti-caffeine, it’s L-theanine. That’s why it’s a popular addition to numerous gym supplements where it helps counter the potential side effects of heavily dosed stimulants with caffeine ranking the most prominent.

Yet, its role in Performance Lab Caffeine Plus is more of a nootropic nature. In this capacity, L-theanine is accepted to boost wakeful relaxation, improve creativity, and lower anxiety while working on improving mood. [*]

And given the fact that it doesn’t have a sedative nature, there is no concern about feeling sleepy while at work or when studying when you supplement with L-theanine.

Tyrosine counts as another nootropic that is added for relieving stress and improving focus benefits. [*]

Manufacturers claim that tyrosine helps reduce neurotransmitter changes that caffeine induces. Adding in L-tyrosine to the formula is the recovery aspect of Performance Lab Caffeine Plus as it’s the perfect ingredient to lower stress levels during stressful episodes or improve alertness after inadequate sleep.

Tyrosine assists in synthesizing and recycling catecholamine. This reduces the possibility of attention issues, mood fluctuations, and energy crashes.

Caffeine Plus contains 250 mg of L-tyrosine.

As you can see, every ingredient in the Caffeine Plus formula has been selected carefully to carry out a very precise role, so what about the B vitamins?

These vitamins in question here are B2, 6, 9, and 12. Incidentally, these four vitamins tend to drop in levels with caffeine consumption, and restocking them is essential.

Speaking of which, caffeine raises homocysteine, which can trigger brain fog, forgetfulness, and related memory issues. The B vitamins make up the balancing segment of Performance Lab Caffeine Plus.

Does Performance Lab Caffeine Plus Work?

While the individual ingredients in Performance Lab Caffeine Plus work well, it is their combined effect that makes this formula so potent.

Starting with the caffeine-theanine combination, which has been proved more effective than using caffeine on its own via clinical trials. [*]

This dynamic duo is successful in resisting distractions, sustaining focus, and switching attention to the next task when needed.

Plus, theanine adds in a creative element. Instead of just promoting alertness and reducing fatigue, the two work synergistically together. When combined, you get all the benefits of caffeine, with none of the drawbacks giving you a clean energy experience.

And the fact that both are taken from completely natural sources only improves their potency.

Here’s a real quick breakdown of how all ingredients balance each other out:

So, depending on individual tolerance, 50 mg may be good enough, or too mild to be of any effect. For most, it is strong enough for a gentle hit, but low enough to double or even triple the dose if you prefer. 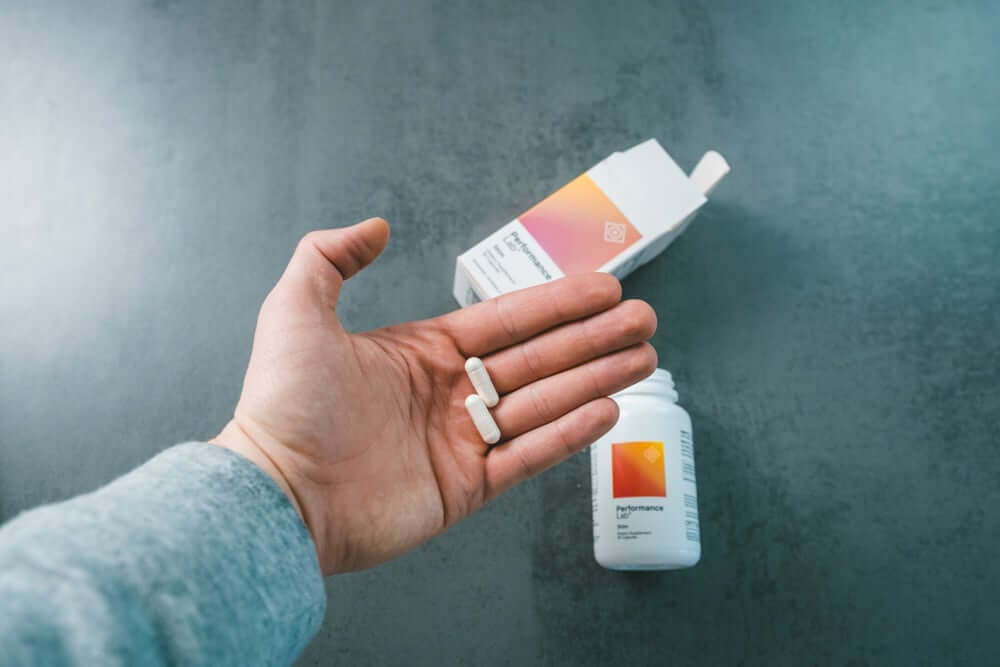 Performance Lab Caffeine Plus Side Effects

Given its non-GMO, allergen-free, and vegan-friendly plant caps, Performance Lab Caffeine Plus doesn’t come with any side effects.

The sensible 50 mg dosage of natural caffeine paired with 100 mg theanine gives users the right burst of energy without the risk of jitters or causing any energy crashes.

While usual precautions would otherwise apply to caffeine, this formula doesn’t do that. At 50 mg per serving, caffeine is restrained and leashed, and adding in theanine to an insignificant caffeine presence makes any stimulant-based side effects almost irrelevant.

Performance Lab Caffeine Plus seems safe and effective for anyone craving healthy stimulation. Anyone looking for a safe and effective stimulant that won’t cause jitters can use this. As such, it can be used in all kinds of settings.

While it could certainly improve sports performance, it’s equally ideal for career-minded people, students, and health-conscious individuals. Anyone who responds unfavorably to caffeine and other energy drinks will especially enjoy Caffeine plus.

Overall, caffeine is the singular ingredient susceptible to bring about side effects but only at higher doses. However, the L-theanine and L-tyrosine in the formula can alleviate most issues.

The Performance Lab Caffeine Plus formula is clean cut with a premium feel. Users like that it is not reliant on caffeine and boasts brain benefits, which are more than just alertness and stimulation.

The serving size, as suggested by the manufacturer, is to take one cap for stimulation.

50 mg caffeine dose is adequate for most. But people with greater tolerance may up their dosage in 50 mg increments up to 200 mg caffeine or four capsules per day.

This is perhaps where a lot of the appeal of Performance Lab Caffeine Plus lies. Most people can toy around with the way Caffeine Plus works for them and enjoy the flexibility of making up their own dosage.

That said, while you have the flexibility to experiment with your optimal dosage, you should also monitor your caffeine intake in other areas of your diet.

Basically, this implies that you should cut down on the amount of caffeine you consume elsewhere during the day.

Where To Buy Performance Lab Caffeine Plus?

If you want to order Performance Lab Caffeine Plus, click here to get the lowest price possible >>

Your Inception recommends supplementing Performance Lab Caffeine Plus. This is one of our favorite energy-boosters on the market. To achieve ultimate cognitive performance, we recommend combining it with Performance Lab Mind.