Mind Lab Pro Vs OptiMind: Which Nootropic Is Better?

Mind Lab Pro Vs OptiMind: Which Nootropic Is Better? 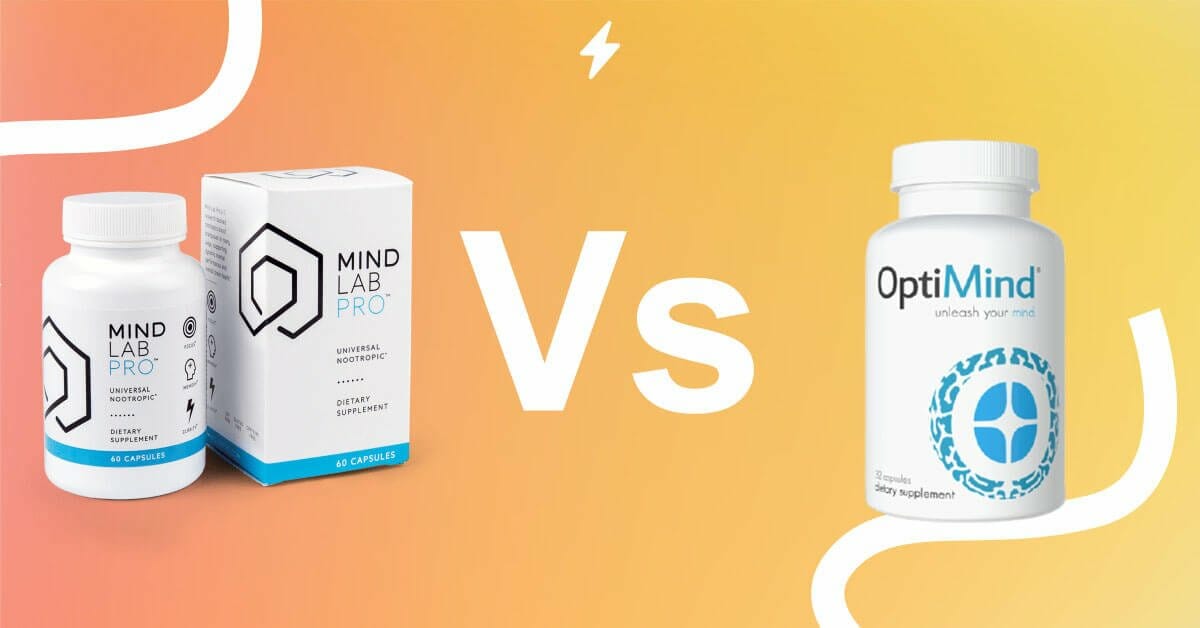 Mind Lab Pro and OptiMind used to be two very popular nootropic stacks. While Mind Lab Pro stayed on the top for years, OptiMind seems to start losing this battle long ago. Or are we wrong? Let’s find out.

Contents show
1 Mind Lab Pro Vs OptiMind
2 Similarities
2.1 1. Both stacks were developed to improve your mental performance
2.2 2. Both companies invested a lot of time into research
2.3 3. They contain similar nootropics
3 Differences
3.1 1. OptiMind contains more ingredients, but they are underdosed compared to Mind Lab Pro
3.2 2. Pricing of both supplements
3.3 3. Overall performance
4 Which Nootropic Stack Is Better?
4.1 Where To Buy Mind Lab Pro?
5 Verdict

Mind Lab Pro and OptiMind have been the first nootropic stacks that we ever tested. It happened back in 2015 when we started researching nootropics.

Back then, the competition was non-existent. There were just a few companies developing nootropics, and both supplements were among the most popular on the market.

With such low competition, it was quite easy for both nootropic stacks to be on the top. Luckily, the situation is quite different today.

While Mind Lab Pro is still one of our favorite nootropic stacks, this is not true for OptiMind anymore. The main reason is that OptiMind stayed far behind Mind Lab Pro in the development, innovation, customer support, etc.

And this is the main reason it’s tough to compare it to Mind Lab Pro. Let us explain why.

Let’s first check the similarities between both nootropic stacks. There were many similarities in 2015, but they aren’t many nowadays.

1. Both stacks were developed to improve your mental performance

Both stacks were indeed designed and developed to help you perform better. They may enhance your focus, attention, improve your memory and mood, and make you more productive.

This hasn’t changed in the past years.

2. Both companies invested a lot of time into research

OptiMind and Mind Lab Pro have been known to put a lot of time and funds into research, which helped them win the market years ago.

Sadly, OptiMind seems to stop developing its leading nootropic supplement. That is why it stayed far behind.

Both stacks contain a few identical nootropic compounds such as Phosphatidylserine, Bacopa Monnieri, L-Tyrosine, and Vitamin B12. As we will soon explain, this doesn’t help OptiMind to fight with Mind Lab Pro successfully.

We guess you are wondering what’s the real difference between both stacks. There are more than you probably thought. Let’s check them out.

1. OptiMind contains more ingredients, but they are underdosed compared to Mind Lab Pro

Besides, nootropics in Mind Lab Pro are better dosed, which is the main reason for the stronger positive effects you get from supplementing Mind Lab Pro.

So no matter the number of ingredients in both stacks, the quality difference is huge.

2. Pricing of both supplements

Mind Lab Pro has a more affordable price per serving compared to OptiMind.

Let’s check it out:

Even though the initial pricing of Mind Lab Pro bottle is higher compared to the OptiMind bottle, the actual price per serving is lower. This is what counts at the end.

There isn’t a significant difference in the price/serving. However, if you include the fact that Mind Lab Pro has a superior formula, then the absolute difference is much more significant.

During our previous reviews of both supplements, Mind Lab Pro always won the tests. It delivers a stronger focus, long-term brain support, it helps with memory, and might even lift your energy.

OptiMind also delivers a very mild energy boost, but this is mainly due to the formula’s stimulants.

In general, the majority of users prefer Mind Lab Pro. It simply gives you more for its price.

Which Nootropic Stack Is Better?

We used to take both nootropic stacks. And we used to like them both. But in recent years, Mind Lab Pro made a dramatic improvement in its formulation, development, customer support, branding, etc.

And OptiMind slowly, but steadily fell behind. After our thorough review of both stacks, we have to admit that Mind Lab Pro is a clear winner here.

No matter which brand you prefer, OptiMind just isn’t as good as its rival.

So, if you are choosing between both stacks, then we recommend going for Mind Lab Pro.

Where To Buy Mind Lab Pro?

If you decided to order Mind Lab Pro, you can do it here >>

After years of researching nootropics and nootropic stacks, we clearly understand the differences among nootropic supplements. In this comparison between Optimind vs Mind Lab Pro, we saw a few similarities, but way too many essential differences. The final result is clear –  Mind Lab Pro wins this battle by a mile.

So if you are searching for a better nootropic stack between the two, go for Mind Lab Pro.