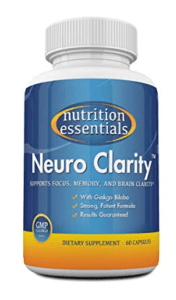 Neuro Clarity seems like a popular nootropic supplement that is exclusively sold on Amazon. I have been asked to review this supplement several times, but since it has pretty bad reviews, I hesitated a bit. But now the time has arrived, and I have decided to do a full Neuro Clarity supplement review. So, do I recommend it?

It doesn’t contain some of my favorite nootropics

Nutrition Essential Neuro Clarity is a nootropic supplement that supports memory, concentration, and cognitive function. It is produced in the US.

Based on the number of customer reviews, it seems a popular supplement.

But a quick look over the ingredients and reviews opens many questions.

Is this supplement safe? Does it deliver any benefits? Should you consider supplementing it?

Let’s look at the ingredients before I answer all the questions. 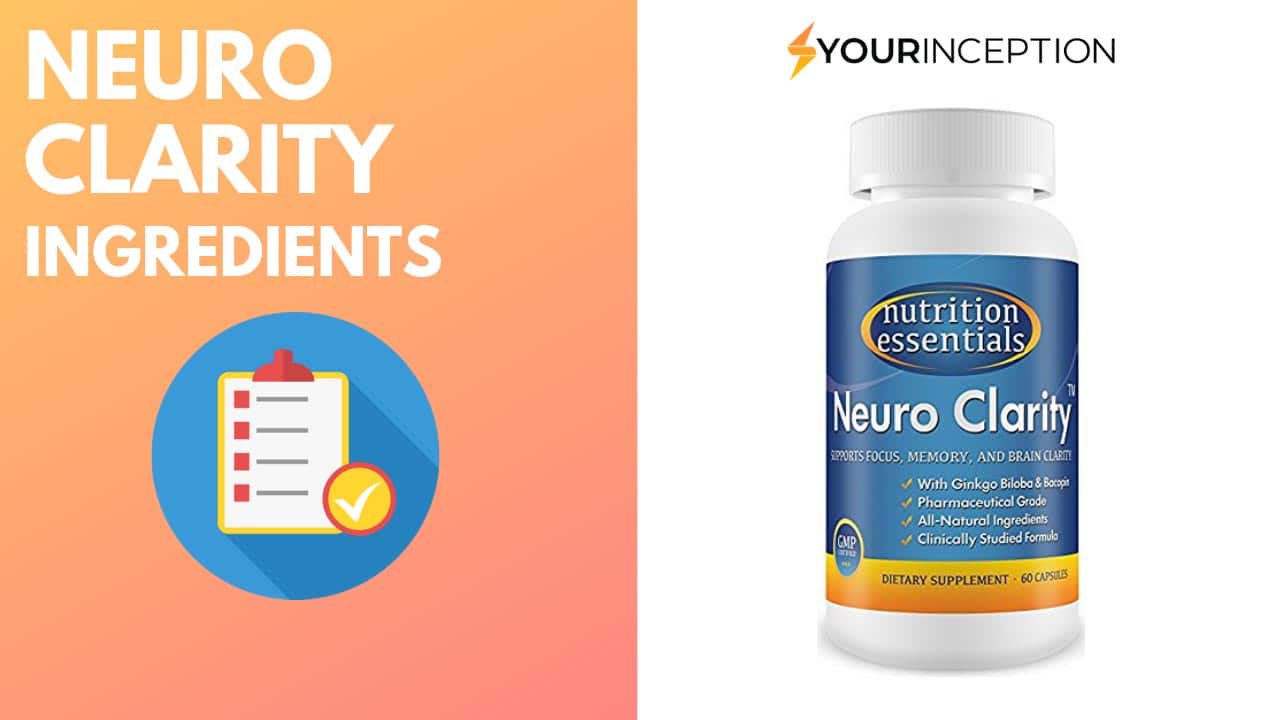 Here is the list of all ingredients in Neuro Clarity:

Bacopa Monnieri is an adaptogen herb that may help with reducing stress and anxiety. Besides, it is often used as a cognitive booster. People have been using Bacopa Monnieri for centuries before it became available in capsules.

However, 75 mg of Bacopa Monnieri is too little for any serious benefits.

I often see low-quality nootropic supplements containing St. John’s Wort. This is a useful ancient herb for treating depression and anxiety. However, it lacks scientific studies, and I cannot say it is safe to supplement. Since it possesses a relatively high risk, it decreases the “safety score” of this supplement.

Currently, I do not recommend supplementing it!

DMAE is a nootropic I like to avoid. Why? Well, because it is one of the most unstable compounds I have ever come across. And users often report adverse side effects such as headaches, etc..

Ginkgo Biloba is a top-rated supplement that can help with depression, anxiety, memory, and it is even an excellent antioxidant. To be really effective, there has to be a specific dosage of strong-enough extract in the supplement. And Neuro Clarity lacks that.

Phosphatidylserine is a nootropic compound that I would like to see in every nootropic supplements. It provides a lot of benefits, such as improved memory, cognition, and it helps people with ADHD.

75 mg is a relatively low dosage.

You probably heard of Acetyl-L-Carnitine before, since it is often mentioned amino acid. If not, don’t worry. This amino acid is commonly used for increasing our mental and physical performance.

Kava is a natural cognitive enhancer that has been traditionally used as an anxiety reducer. However, studies show that this supplement is not entirely safe, so I suggest avoiding it.

L-Glutamine is a conditionally essential amino acid, which means that we “might have to supplement it.” It’s an all-right addon, but it doesn’t play a significant role here.

Neuro Clarity has one of the most terrible formulas I have ever seen. It contains a few nootropic compounds I do not recommend taking due to the lack of studies. On the other hand, many nootropics are severely underdosed. This is a potentially dangerous or simply an ineffective nootropic supplement.

One of the main questions people ask regarding supplements is: Do they work? What kind of benefits can I expect?

So, what do we know about Neuro Clarity?

My detailed research showed that Neuro Clarity lacks a whole bunch of nootropics and essential ingredients to be an effective nootropic supplement.

There is no choline source; there are no long-term effective nootropics; there is a lack of short-term active ingredients.

I am talking about St. John’s Wort, DMAE, and Kava Kava.

St. John’s Wort is risky because there is a lack of studies that would prove it safe. Also, it is potentially dangerous for many groups of people who take a different kind of medicine.

DMAE might be safer, but as I mentioned a couple of times, it is pretty unstable. And similar is true for Kava Kava.

So Neuro Clarity is far from being a safe nootropic supplement.

3. This formula is under-dosed

As you could expect, a supplement that contains eight ingredients, and it is priced at less than 20$ can’t be high-quality.

If it is, it merely means that it is under-dosed. And this is true for Neuro Clarity.

Based on my research, not even one ingredient is dosed as recommended. Of course, if you follow the recommended daily dosage of 2 capsules.

If you take the double dosage, then the product isn’t that affordable anymore, and you consume a higher amount of potentially risky ingredients.

If you want to try Neuro Clarity, the daily recommended dosage is 2 capsules.

But based on my detailed research, this is not enough. By increasing the dosage, the risk for side effects is higher.

So you have to stick to one capsule per day.

By taking such a low dosage of nootropics, it is hard to expect adverse side effects.

But…there is always a but.

Since Neuro Clarity contains several risky ingredients, that are known to cause side effects, I suggest being very careful.

For example, Neuro Clarity contains DMAE. Typical side effects of supplementing this compound include:

If this happens, immediately stop supplementing Neuro Clarity and consult your doctor.

Where Can You Buy Neuro Clarity?

Do you still want to buy Neuro Clarity? If yes, you can order it on Amazon.

However, I currently do not recommend buying it.

Check below for my final recommendation.

Your Inception does not recommend the Nutrition Essential Neuro Clarity supplement. Sadly, the formula lacks nootropics, it is under-dosed, and it might be very risky.  If you want to take a recommended dosage of all individual ingredients, you would have to take at least 2-3 capsules per day. This would dramatically increase the price, and you would consume even more potentially risky compounds.

Instead, we recommend taking high-quality, well-tested, and effective nootropic stacks that actually work. Click on the button below to learn more.