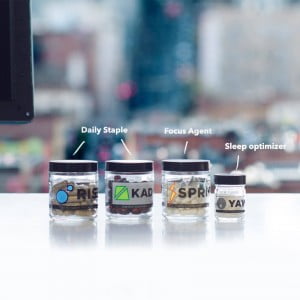 It’s not the cheapest supplement on the market

Geoffrey Woo and Michael Brandt, the co-founders of HVMN (before it was named Nootrobox) company, backed by a capital fund called Andreessen Horowitz, developed Nootrobox – a nootropic supplement for improving your cognitive performance, health, and sleep.

The stack was named Nootrobox before, changed to HVMN, and now again to Nootrobox. To avoid confusion, I will be using both names.

Compared to other popular nootropic stacks, Nootrobox does not combine all ingredients in one supplement, but instead provides four separate stacks, which gives you more flexibility.

At the price of around $100, the entire stack isn’t too expensive, but it isn’t cheap either.

But does it work?

When I first saw the marketing campaign of Nootrobox, I got intrigued to try it out as soon as possible. With so much media coverage, this nootropic stack must offer something special, right?

I researched it and then decided to give it a try. But I couldn’t order it because they didn’t ship it to my country in Europe (last time I checked, they only sent their supplement across the US).

This was a bummer for me, but luckily, some friends of mine bought it for me and shipped it directly to my home.

I received the package around a week later, and I couldn’t wait to start the test.

As I’ll explain later, there are 19 ingredients combined in the whole stack. This makes it definitely one of the most advanced stacks on the market!

WEEK 1:
I started taking SPRINT, RISE, and KADO-3 in the morning (with my breakfast), and I added YAWN the same day in the afternoon.

I felt the first effects about 15-30 minutes after taking the capsules. I was able to feel quite a strong focus and energy boost, which came with a bit of jittery.

While I liked the boost, I actually felt a bit weird. Instead of feeling very motivated, I became slightly anxious.

But I continued taking the capsules for another week.

WEEK 2:
I continued taking all 4 supplements (I’ve been taking YAWN every 3rd day and SPRINT every 2nd day). As always, I avoided all other supplements that I usually take.

The anxious feeling stayed with me, and I even felt slightly sick when I took the capsules on an empty stomach.

But I didn’t stop my test…

WEEK 3:
After 3 weeks of testing HVMN, I got used to taking so many capsules every day, even though it’s far from being convenient. Keep in mind that if you want to achieve optimal health and performance, you have to combine Nootrobox with other supplements.

Anyhow, I was quite happy with SPRINT, RISE, and KADO-3 combo, and I still wasn’t convinced about YAWN.

I cannot say I had any issues falling asleep during the test period, but I also cannot confirm that I felt the effects of YAWN.

I expected a lot from this nootropic stack. I really hoped it’s going to working exceptionally well, but I’m not so sure about it after my test.

While there is NO DOUBT this stack will give you an energy boost, you might feel jittery, anxious, and it can become very difficult to sit down and focus on your most important work.

Let’s look at the ingredients to see why this happens.

While the majority of “nootropic brands” aren’t too open when it comes to the exact ingredients they use, HVMN is an exception here.

The company shares the exact amount of all ingredients in every stack, so you are entirely on the safe side.

Also, you can find several certificates on their website, proving their doses, and nootropics quality.

For more details about the ingredients, please read further. 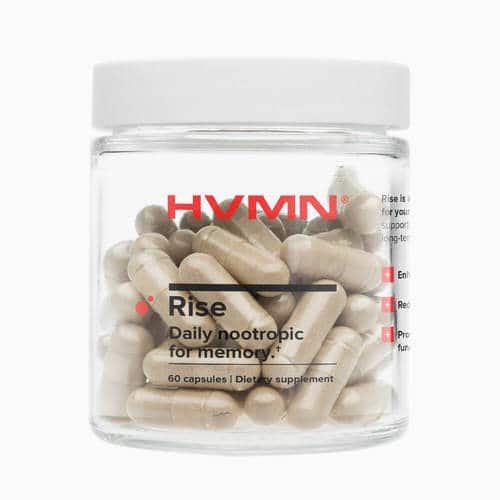 Rise by Nootrobox (HVMN RISE) is your daily nootropic. The nootropics in RISE have been shown to enhance memory, stamina, and resilience.

Bacopa Monnieri is an adaptogen herb that can improve your memory. It is also used for treating anxiety and depression.

The potency of Bacopa monnieri is standardized to a 50% bacosides content level, the highest potency available. The actual bacoside content in RISE is equivalent to levels used in studies showing statistically significant improvements in memory.

CDP Choline is a very potent choline source vital to the neurotransmitter acetylcholine. It is not as effective as Alpha GPC or Cognizin, but it is a must-use nootropic for improving learning.

Ashwagandha is an adaptogen herb that is very effective for helping people with anxiety. Many people swear to it, but I have mixed experiences with it. 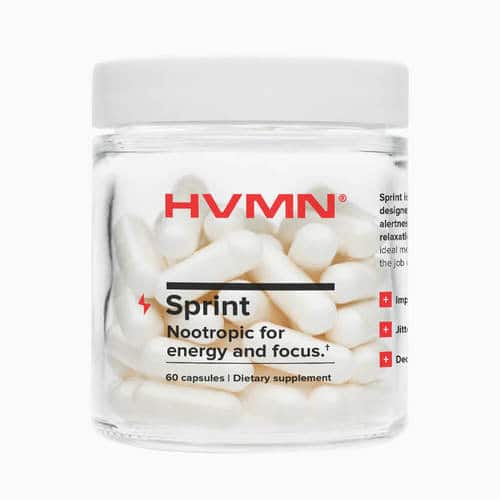 SPRINT by Nootrobox (HVMN Sprint) is a nootropic blend designed for immediate effect. It’s components have been shown to boost instant clarity, energy, and flow for four to six hours.

SPRINT is ideal to use to conquer a big project, a long day at work, or any mentally demanding task. By providing alertness and relaxation at the same time, SPRINT puts you into the ideal mind-state for getting work done.

The ingredients in SPRINT are:

Research shows that L-theanine + caffeine together have strong positive effects on word recognition, rapid visual information processing, attention, and mood beyond the effects of caffeine alone.

These cognitive benefits carry over into a wide variety of cognitively demanding tasks we face in our jobs, classes, etc.

Ginseng has been used for centuries to improve cognitive performance. I like it as an individual compound, but I experienced some adverse side effects when I combined it with caffeine. 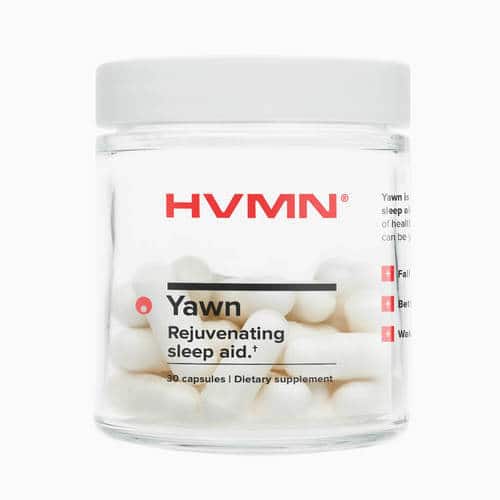 HVMN YAWN is a nootropic blend with components optimized for each of the three phases of sleep: falling asleep, improving the quality of sleep, and feeling refreshed upon waking up.

Sufficient, high-quality sleep is widely agreed to be the single most important activity you can do to optimize cognition and your mental state in the near-term.

Glycine has been shown in multiple trials to improve both subjective and objective measures of sleep quality and improves day-after cognitive performance.

Magnesium is a general relaxant and critical for a healthy nervous system function. Magnesium deficiency, at least to a minor degree, appears to affect a large percentage of adults.

I’ve been using Magnesium spray for quite some time, and I prefer it compared to magnesium in capsules.

L-theanine has been shown to reduce stress and anxiety as measured by cortisol and other biomarkers. It is one of my favorite amino acids.

Melatonin acts powerfully to promote your desired sleep-wake cycle by reducing the time it takes to fall asleep. While it is very useful, long-term use is not recommended due to potential dependency. 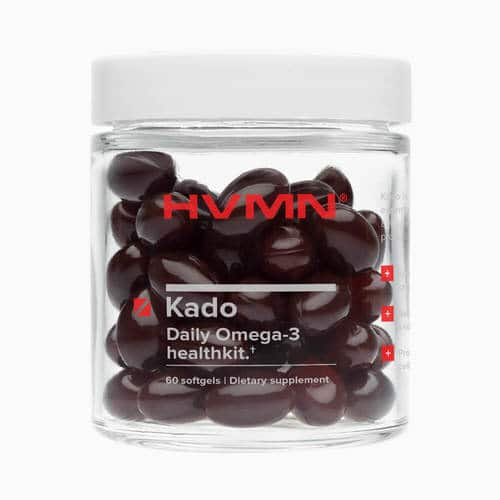 KADO-3 is a supercharged Omega-3 stack derived from fish and krill oils, and it’s designed for daily protection for the brain and body.

KADO-3 is optimized with an ultra-high 2:1 ratio of DHA to EPA (which optimizes for cognitive benefit) and rounds out with three other essential components: Vitamin K, Astaxanthin, and Vitamin D.

The first letter of each compound together form the name KADO-3. Kado-3 is a nice add-on to other ingredients. There is a high likelihood you are deficient in Vitamin D3 (especially if you stay a lot of time inside and don’t get a lot of sun exposure) and Omega-3.

Since HVMN consists of 4 nootropic stacks, you have to make a plan when you take each supplement.

During my 3-week test period, I experienced a few adverse side effects.

I felt jittery, a headache, and even slightly sick. I believe the reason for that is a very high dosage of caffeine, combined with a too-small dosage of L-theanine, and Ginseng.

I noticed no other negative side effects.

If you experience any issues with Nootrobox, do consult your doctor.

The majority of brands that manufacture and sell nootropics focuses on getting as many user reviews as possible. HVMN is an exception.

Instead, HVMN has focused on getting as much media coverage as possible. HVMN received coverage from Bloomberg, The Wall Street Journal, The New York Times, Observers, and The Guardian.

And most coverage and feedbacks were extremely good!

But I also checked out the reviews of fellow nootropic experts and random users of HVMN. 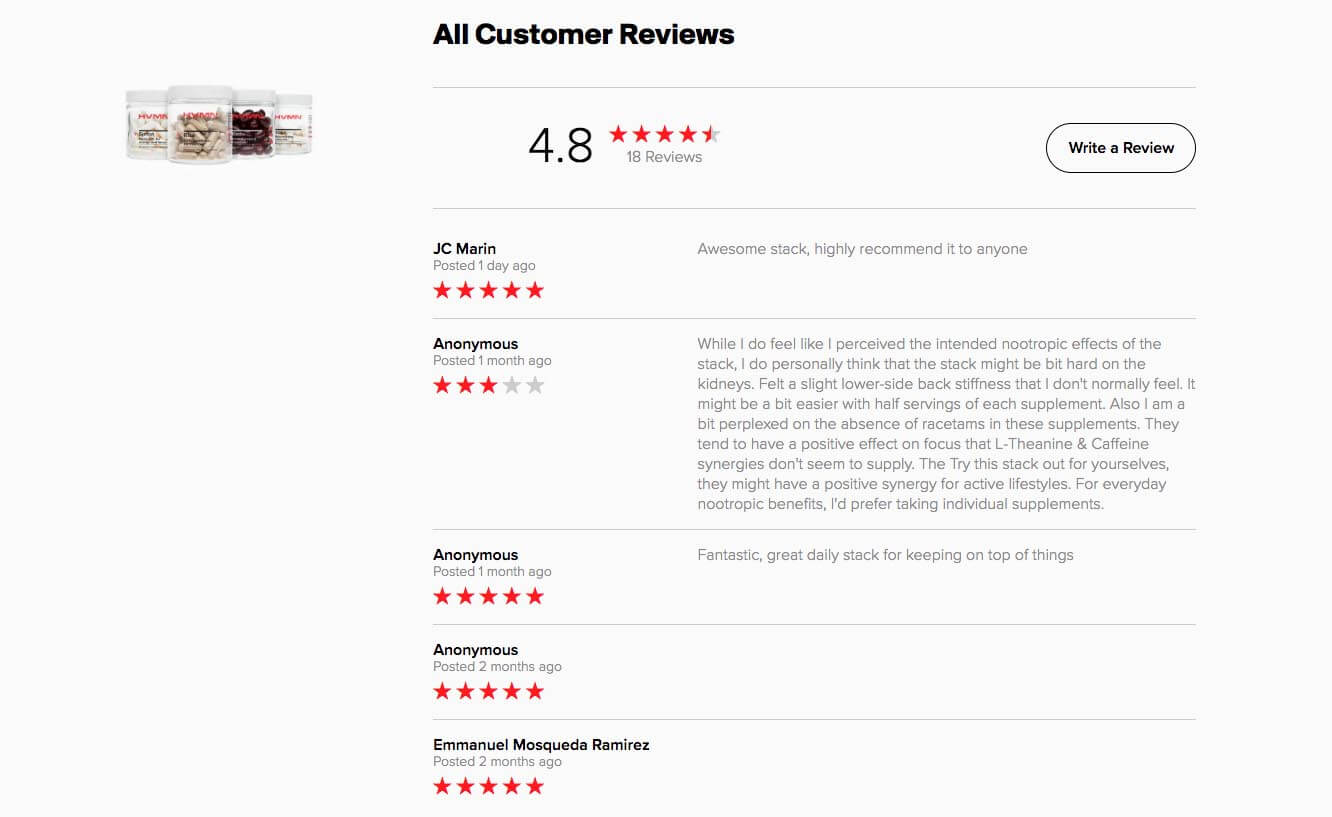 Many people sadly report feeling adverse side effects similar to mine. In general, reviews aren’t bad, but they aren’t great either.

Where Can You Buy Nootrobox?

If you decided to order Nootrobox, you can do it on their homepage either as a full package (RISE, KADO-3, YAWN, and SPRINT included) or as separate products.

The whole package costs around 100 $.

However, as it currently stands, I do not recommend buying Nootrobox.

Read below my explanation for that.

Your Inception DOES NOT recommend supplementing Nootrobox. While HVMN developed a very advanced nootropic stack, it lacks behind its competitors. It’s among more expensive stacks, it contains an extremely high dosage of caffeine, and many people reported adverse side effects. Therefore, I suggest buying a better, safer, and more effective nootropic stack.

Click below to find the best nootropic supplements on the market.