AZOTH 2.0 Review: Can It Beat Competitors? 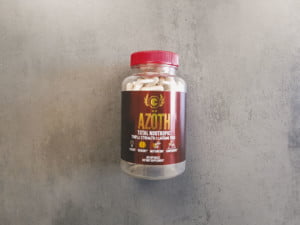 Product Description: AZOTH 2.0 is a nootropic supplement that contains patented ingredients designed to increase memory, motivation, focus, and confidence without a crash.

It has a very advanced formula

Azoth 2.0 is much better compared to the previous version

It’s on the expensive side

AZOTH 2.0 is a nootropic supplement that contains patented ingredients designed to increase memory, motivation, focus, and confidence without a crash.

Instead of caffeine, AZOTH contains Theacrine (TeaCrine), which is not a real stimulant, but it works similarly.

It’s a bold move to promote drastic mood improvement and enhanced energy without caffeine in the stack.

About a year after I reviewed the “original AZOTH,” I had a chance to test the updated 2.0 version.

The first look on the ingredients showed a lot of potentials. The formula has been slightly improved, and it is better dosed as before.

So I’ve decided to test AZOTH 2.0, and see how it performs. 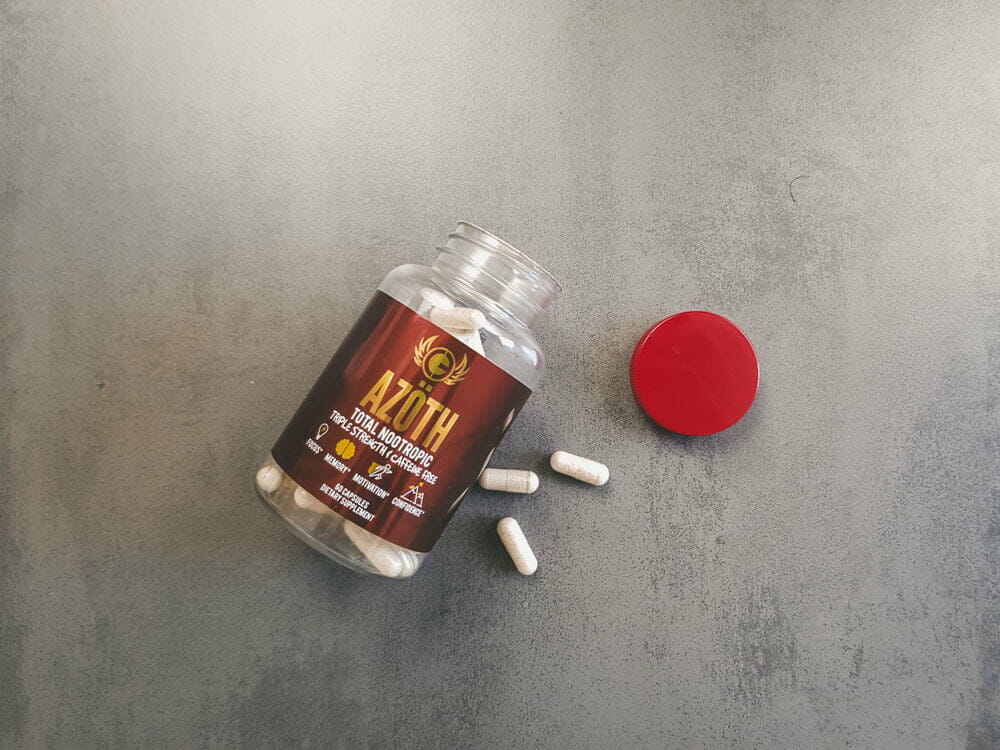 This stack contains 60 capsules, so I expected that I’d have to take two capsules/day. But the recommended daily dosage is 2-4 capsules/day.

If you carefully look at the ingredients, then you’ll quickly see that four capsules should perform much better than two capsules.

Anyhow, I’ve started the test by taking two capsules per day. I took them with a light breakfast early in the morning.

On the first day, I didn’t feel any difference. I believe I was a bit more relaxed, but I wouldn’t bet on it. Apart from that, I felt all right, nothing special.

So I’ve decided to increase the daily dosage to 4 capsules.

And that was a smart move!

When I took four capsules, I performed much better than before. I felt a mild energy boost, I felt more focused, and working became easier.

I continued taking four capsules per day, and I felt pretty much the same every morning. I felt a mild energy boost, I felt more focused, and consequently, more motivated.

One day, I felt slightly sick about 30 minutes after I took the capsules, but I don’t believe it was related to the nootropics.

Overall, I was quite satisfied with the performance.

AZOTH 2.0 is manufactured in the US (Georgia) in a cGMP Certified, FDA-Registered facility.

They use 100% vegetarian capsules.

Here is the list of all ingredients in AZOTH 2.0:

Here you can learn more about some of the crucial ingredients in AZOTH 2.0.

Phosphatidylserine is a compound similar to a dietary fat that is highly prevalent in human neural tissue. It can be synthesized as well as consumed through the diet, but further benefits can be gained through supplementation. It is vital for cognitive function but is not necessarily needed as the body synthesizes it.

Sulbutiamine is a highly bioavailable form of Vitamin B1 that facilitates the stimulation of the neurotransmitters glutamate and dopamine and increases communication between neurons in the brain.

TeaCrine® is a patent-pending compound containing pure TeaCrine, which has molecular similarities to caffeine. However, unlike caffeine, TeaCrine® provides energy-boosting effects without the jitters, the crash, and the habituation that often accompany caffeine consumption.

I’ve read about TeaCrine before – I think we still lack some research, but there seems to be a high potential in TeaCrine.

Several nootropics include Alpha-GPC, and there is a lot of research proving the effects of it. I’m happy AZOTH includes it in the formula in a relatively high-dose.

Currently, I do not recommend supplementing Huperzine-A due to the potential adverse side effects!

L-Tyrosine increases brain neurotransmitter concentrations and suppress rises in cortisol and norepinephrine depletion. This has the effect of severely reducing stress during times of high-pressure, increasing reaction time, and augmenting awareness and cognition during periods of deep sleep or nutrient deprivation.

As a powerful anti-oxidant, Ashwagandha promotes immune protection and is used to reduce performance anxiety before major life events significantly.

Besides, Ashwagandha can improve physical performance as well as reduce LDL cholesterol.

Bioperine is the only product sourced out of piperine to obtain a patented status for its ability to increase the bioavailability of nutritional compounds. Taking Bioperine increases the likelihood that your body is absorbing the ingredients you are ingesting. 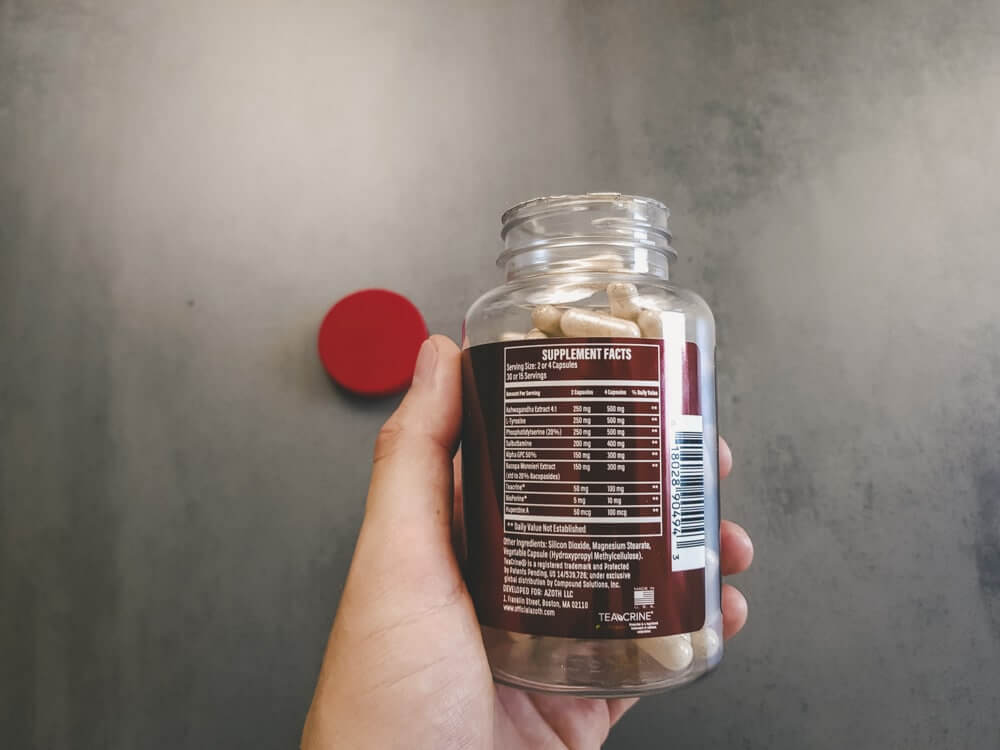 AZOTH 2.0 is one of the best-dosed nootropic supplements on the market. While the majority of competitors sell under-dosed products, AZOTH seems to play in a different league.

Most ingredients are well-dosed, the formula contains some outstanding extracts such as Bacopa Monnieri, Ashwagandha, and Alpha GPC.

It provides a nice mix of several nootropics, and it does deliver on its promises.

If I compare AZOTH to some of my favorite nootropic stacks, I can still notice a couple of things that have to be improved in Azoth.

First, I’d like to say that AZOTH 2.0 has been improved from the previous version, which I like!

In general, the formula is very good, no doubt about that. However:

The recommended daily dosage is 2-4 capsules per day. I recommend starting with two tablets, but you should consider taking four tablets for the optimal effects.

It’s also recommended taking the capsules in the morning with healthy fats.

That’s how you should avoid any adverse side effects.

During my test period, I didn’t experience any side effects (except for a little sickness one day, which I don’t believe was related to AZOTH).

If you take two capsules per day, you are well within the recommended dosage. By taking four capsules, you are somehow on the limit.

If you do feel issues, decrease your daily dosage, and consult your doctor.

Can You Build Up A Tolerance?

No, based on my research, I don’t believe you can build up a tolerance.

However, I still recommend cycling nootropics (five days on, two days off).

That’s how you’ll achieve the best performance, while you’ll stay on the safe side.

Do you want to check what others say about AZOTH?

Yahoo Finance – AZOTH 2.0 is for anyone and everyone seeking to maximize their time and productivity.

Street Insider – AZOTH is positioning itself as a leader in Nootropic market.

Daily Chronicle – In a marketplace full of pretenders backed not by the quality and dosage of ingredients, but by fancy marketing campaigns, AZOTH 2.0 stands unique.

Honestly, there is not much to add here.

You can buy AZOTH here >>

Use code YOURINCEPTION15 for 15% discount :)

Should you have any questions, do not hesitate to contact me.

Your Inception potentially recommends buying Azoth 2.0.We are thrilled that the company who developed AZOTH listens to user feedback, and is optimizing their formula. This is the only way to develop an outstanding nootropic stack. And AZOTH 2.0 isn’t far from that.

It delivers a few great benefits, and it is one of the best-dosed stacks on the markets. It’s far from being a cheap product, but it might as well be worth the price.

However, since the product contains Huperzine-A and it lacks a few important nootropics, we still prefer some other, higher-quality supplements. Click on the button below to check them out.

6 thoughts on “AZOTH 2.0 Review: Can It Beat Competitors?”